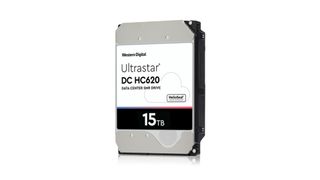 Western Digital has revealed it expects its first 20TB hard disk drives to ship next year.

In a press release, Martin Fink, the CTO of Western Digital, confirmed that the drive will feature nine disks which means that each platter will have a capacity of at least 2.22TB.

Also confirmed is the fact that the new 20TB drives will run on SMR (Shingled Magnetic Recording) technology, rather than helium.

Seagate announced last year that it was going to ship a 20TB drive by end of 2019 but has yet to demonstrate a working product. A prototype of WD's drive is expected to be showcased this week.

While 2TB platters are nothing new - TDK demonstrated the first one in 2012, the ability to cram nine of them without using helium is a bit of a surprise.

The announcement of a 20TB drive for 2020 was one of a bunch of news including the Zoned Storage (ZNS) initiative that leverages the advantages of zone block management to architect a “robust, efficient and purpose-built storage tier”.

Last week, Seagate, WD’s archrival, announced the launch of the 16TB Iron Wolf hard disk drive for just under $600. Shockingly, it was a prosumer product, not just for enterprise and data center clients.

Western Digital is also hedging its bets by investing massively in solid state drives as well as demonstrated by its new ZNS NVMe SSD to deliver increased capacity, better throughput and lower latency.

If you can’t wait for next year and want 20TB of desktop-grade storage right now, then WDcurrently sells the My Book Duo with two 10TB drives.