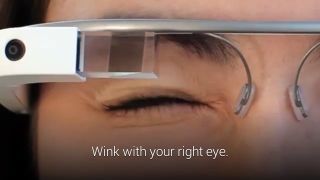 Google's oddball eye glasses, which everyone seems to be talking about even though, statistically speaking, no one outside of a tiny US geek bubble owns or uses them, has got a little creepier.

News emerged this week that the latest software update to Google Glass adds the ability to take a photograph by winking, removing the requirement to speak to your glasses out loud in order to take a snap of whatever you might be looking at.

This seemingly minor tech update generated some rather negative associations out there in internet world, with the word "creepshot" and suggestions that Google might start attracting the wrong kind of user popping up beneath news stories about the updated potential voyeur-enabling technology.

But is it really that bad? Is wearing Google Glass really going to single you out as either a complete nerd/loser or a Triple-A grade stalker?

How can you expect to be taken seriously?

Well, yes. Mashable reader Chris Inverta Han, who seemed to be using his real name for a bit there before we realised he probably wasn't, said this latest incursion by Google is a: "Prime example of the suffocation of regular HUMAN interaction in REALLY LIFE by social media and related technologies."

We think he means REAL, but still. The point being that instead of talking and behaving normally, the man of the future is going to be staring blankly at a projected UI only he can see, contorting his face to get it to do something interesting instead of, say, cheerfully discussing the awful weather with his fellow man.

Bafflement with Google Glass from the general populace outside the Silicon Valley New Technology Enthusiast Club was summarised a little further down the same thread by Eric Kivet, who asked: "I have no idea how anyone, unless at least mildly psychotic, could wear these anywhere and expect to be taken seriously."

Over on Firstpost, reader Icarus8 came to Google's defence, sort of. He suggests Google Glass isn't turning people into voyeurs and pervs, because the voyeurs and pervs already have their HD cameras hidden in bags, shoes, behind bathroom mirrors and so on. He said: "If people want to take your picture and record your conversations in public, they can easily do so already. Google Glass makes the technology more accessible, but it doesn't turn people into creeps or spies. The creeps and spies already have inconspicuous cameras and recording devices."

He then veered into slightly dodgy territory, advising people to: "Maybe wear clothing that is remotely modest if you dislike penetrating stares." Don't go down that road. Never ends well.

Further down the thread, the same sort of obvious lies and vague threats we've come to see made toward future tech appeared, with Desslok suggesting/lying through angry fingers: "I will indeed, beat beyond recognition, anyone who even looks at me wearing Google glasses."

As well as poorly directed shotgun anger, the other trend we see week on week here is the good old NSA popping up to add the sort of menace to discussions that politicians try to conjure up when shoehorning terrorism into every policy decision.

The Verge reader Johnny Dangr suggests people ought to be more worried about the US security services hacking into Google Glass and using them all as useful live webcams, suggesting: "Most people are OK with someone looking like a geek fool wearing their virtual reality glasses. We've seen it for years before Google's $1500 attempt and will see it again. It's just fun to laugh at them. What worries most people is that now the NSA is watching through those glasses."

Reader AntarcticOutpost shot him down, though, offering: "You'd notice the battery burn if the NSA took it over. It'd be dead in half an hour."

A more thoughtful response came from Omen_20, who suggests people in general ought to get over themselves, as they're really not interesting enough to be worth monitoring. He said: "...people's weird belief that they're the centre of everyone's universe annoys me." But then who cares what he thinks?

Wiggle it just a little bit

Sadly, some people will never know what it's like to control Google Glass with a wink. Extremely mildly disabled commenter A Lewis over on Engadget complains: "I can only wink with my left eye though. Seriously, when I try to wink with my right they both close."

Try wiggling your ears instead. It's motion based, apparently.

Inflame is TechRadar's weekly look at below the fold - where we round up the best comments from the technology's most-read stories.