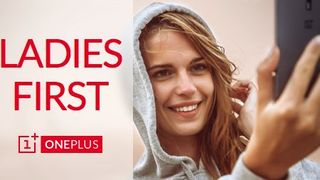 Sadly, I'm all too used to moments of ignorance and sexism as displayed by a now pulled OnePlus contest.

If you haven't already heard, OnePlus launched a contest to commemorate reaching 200,000 message board members in which only women – or "ladies" as we're referred to like a Tuesday night cover charge special – were asked to submit a photo of themselves with the OnePlus logo drawn on a piece of paper or themselves.

The 50 photos that garnered the most "likes" on the predominately male OnePlus forums would earn the entrants a T-shirt. If there were at least 500 entries, OnePlus would do the gentlemanly thing and invite its "favorite photo" to buy a One smartphone.

"This is disgusting," one person wrote.

"You folks are gross," another chimed in. "Any interest in buying your phone just melted away."

It goes on like this, and it's worth noting many of the Twitter users expressing disgust over the contest and saying they're taking their business elsewhere are male. One "lady" wrote, "Here's my photo. Not sure I'm following the rules, but I think it conveys my message." Her entry is below:

Sarah Ditum wrote a great op-ed on the consequences of excluding women in tech, and one of my favorite lines from her April piece is this: "The problem is, the industry appears to carry on under the impression that it's a perfect microcosm of the rest of the world, and then gets surprised every time it's reminded otherwise."

It appears that's what we're living out right now; some folks at OnePlus thought this was completely OK to do and saw nothing wrong with it … until the internet (a.k.a. the world) reminded them otherwise.

Such is the beauty of direct engagement and social media – people can instantly call you out when you do wrong.

It's important to note this contest also excluded men, which isn't a good thing either.

A OnePlus administrator posted an apology after hours of silence, saying the company understood "our contest was in bad taste," but the damage seems apparent.

Will a promising company and well-reviewed phone be undone by a moment of sheer stupidity? As some tweets attest to, business is already walking out the door.

We're here, and we're only getting stronger

We're reminded continually that the tech world suffers from a dearth of diversity and female workers. Apple is only the latest company to release a diversity report that shows it's really not diverse at all. Just 30% of its workforce is female and 55% of its employees are white. Women are most highly employed in non-tech jobs.

A OnePlus spokeswoman told me almost half the company's staff "is female including in senior positions." She didn't say whether any were involved in the contest, and explained in a statement that the "Ladies First" contest "was a very misguided effort by a few isolated employees" to encourage more women to get involved with and excited about tech. Misguided, indeed.

I'm nothing new or a fluke; I know a number of women, many of whom work at Future, TechRadar's publishing company, who breathe their iPhones, can build their own PCs and can't wait for Mass Effect 4 to come out.

And yet women who like tech are treated like we don't exist or, almost worst, like we would be willing to participate in a photo contest where people vote on our image so we can buy a device. It's degrading, disgusting and infuriating.

The world of technology and gaming and everything that's packaged along with it has always been about inclusion. It welcomes, or at least believes it welcomes, outsiders - people who don't feel they fit in, people with different ideas than mainstream society and people who want to do and experience the extraordinary not prescribed by the rest of the world.

Yet, as has been written about ad nauseam and company diversity reports continue to show, women are sorely missing from tech.

So what's the solution? Encourage girls and women to pursue their interests in technology. Educate them and hire them. Open up seats in positions of power where, if something like this comes across their desk, they can say, "No." I'd personally say, "Oh hell no!" but we all of our different management styles.

There are programs like Girls Who Code, TechWomen, Women Techmakers and WeTech that seek to support girls and women in technology careers. More and more conference panels are focusing on women in tech and gaming. Women like Meg Whitman, Ginni Rometty, Marissa Mayer and Sheryl Sandberg are breaking through the boys club of executive positions at tech companies.

This is all fantastic, but we're kidding ourselves if we think this is enough, especially when incidents like today's happen.

Quick anecdote: I approached Sandberg at Facebook's developers conference earlier this year to ask for a photo and talk women in tech with her. She was taking pictures with any attendee who asked, but when I did she said, "Of course! Especially for another woman." She is acutely aware our numbers in this sector are far too small.

My ideas have been said in one form or another elsewhere before. I know I'm not adding anything revolutionary to the conversation, but I am adding my voice. I'm speaking out that we need more women in tech and that we must do away with the tone deaf sexism that rears its ugly head all too often.