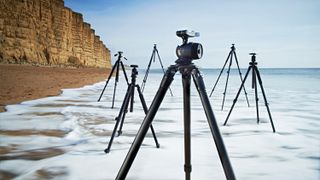 Question: what has three legs, one head, and doesn’t get out much? Answer: that big, heavy tripod that’s too much of a chore to lug around.

But it doesn’t have to be that way. Increasingly, manufacturers are coming up with cunning designs that are relatively compact and lightweight, yet extend to lofty operating heights and offer solid support even for heavyweight camera and lens combinations.

Better still, the latest tripods are often packed with intriguing features and clever tricks. It’s all good news because, even in broad daylight, a tripod can help you get sharper shots with better, more precise composition. Let’s start at the top and work downwards.

What type of head?

Every tripod needs a head, and the smart money is on ball heads. Many tripods are sold as kits, comprising legs and a head, although sometimes you’ll need to buy the legs and heads separately; you don’t have to stick with the same manufacturer for both items, but there are a couple of things to bear in mind if you want to mix and match.

It’s also good to check that that the diameter of the ball head’s mounting plate is roughly the same size as the mounting platform on the tripod – diameters tend to range from around 45mm to 60mm. And finally, it makes sense to get legs and a head that have a similar maximum load rating.

The main plus point of a ball head, compared with a traditional three-way photographic head, is that they’re much quicker and easier to set up. A single locking screw is all that’s needed to enable a full range of movement, and there are no locking arms sticking out that need to be removed for stowing the tripod away.

Drawbacks of conventional ball heads have also been addressed in many of the latest designs. For example, it’s common to find an adjustable friction damper as well as the main locking screw, so that you can tailor operation to suit your camera when fitted with lenses of wide-ranging weights. An additional pan-only release is also often fitted, so you can keep a ball head locked in position but still pan the camera to track action, or to take a sequence of shots for stitching into a panoramic image.

Moving on down, the joints at which the three legs are joined to the main chassis typically feature mechanisms with which you can lock the legs at three or more different angles. This enables low-level shooting without the need to remove and invert the center column, saving time and effort, and avoiding the need to shoot with the camera upside down. Splaying the legs further apart also adds stability in low-level shooting, and it can also be useful to use different legs at different angles on uneven terrain.

Another innovative feature often used in recent designs is a pivoting center column. With many tripods, you can pivot the center column through 90 degrees and use it as a horizontal boom. It’s great for shooting extreme close-ups with a macro lens, and helps to avoid the tripod feet sneaking into the picture if you're shooting with an ultra-wide-angle lens.

It’s also useful in conjunction with multi-angle leg locks for very low-level shooting. The pivot design in some tripods goes further still, enabling the center column to be locked at many angles in small increments through a complete 180 degree arc, instead of just in vertical or horizontal orientation.

The leg sections themselves are usually three in number. This gives a good compromise between maximum operating height and minimum folded height, as well as ensuring that the bottom sections aren’t too thin and spindly. However, ‘travel tripods’ often feature four or even five sections, so that they can fold down smaller – this can impair rigidity when you need to use the thinnest, lower leg sections, and set-up can take longer if you need to release and re-lock up to 12 separate clamps, for example, for tripods with five-section legs.

The section clamps themselves tend to be either twist-action or locking levers. Some people find twist clamps quicker and easier to operate when the legs are folded down, while others find locking levers more convenient. Locking levers became all the rage a few years ago, but twist-locks have been making a comeback.

Another space-saving idea that’s featured in an increasing number of travel-friendly tripods is that the legs swing upwards for stowage, with the head nestling between the feet. Set-up can take a little longer, but it typically knocks about 20cm off the folded height.

Down at the bottom, there are two types of feet generally on offer. Rubber pads work best on smooth, hard surfaces, whereas metal spikes are better on carpet and loose ground. Some tripods come with interchangeable feet to suit every occasion, while others might feature rubber pads with retractable spikes.

A material consideration is whether to go for aluminum or carbon fiber. Both are capable of providing very sturdy support but carbon fiber tripod kits (with the same heads attached) are typically about 15% lighter in weight than aluminum versions of the same kit. Naturally, the bigger the tripod, the greater the weight-saving, but it generally works out to around 500g.

Carbon legs look smart and have more of a feelgood factor, but are more susceptible to shattering if they suffer a sharp knock. And where carbon and aluminum versions of the same legs are available, the carbon edition can sometimes be as much as twice the price.