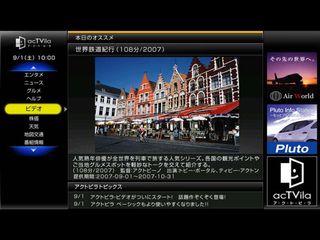 It may be two months late, but the domestic high-definition video-on-demand (VoD) service promised to Japanese consumers by Panasonic, Sharp, Sony, So-net, Toshiba and Hitachi is almost ready to roll.

The acTVila scheme we reported on in August was due to start in September, but will now go live on 1 November. It will offer HD TV pay-per-view films that can be downloaded direct to suitably equipped TV sets for a fee between ¥210 (90 pence) and ¥420 (£1.80), depending on the movie.

Stick it on the tab

Fees can be paid either by entering credit card details or through an addition to the user's regular ISP bill. Downloads can be watched at any time but will expire after a pre-set period of between 24 and 72 hours.

Although an initial line-up top-heavy with older releases and bland mass-market fare is far from inspiring, the innovative aspect of acTVila lies in the receiver hardware being built into TV sets. Compatible televisions are already available from Panasonic and Sony, with more to come from the other partners.