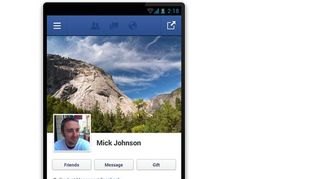 Facebook users with an Android phone can now download a new app for their mobile platform from Google Play.

The social network rolled out Android 2.0, a native app that, according to Facebook, improves on speed and performance.

The native code refresh isn't all encompassing: an FB post on 2.0 noted that "several" of Facebook for Android's core features were rebuilt, so the functions most everyone uses should see vast improvements.

In addition to zippier uploads, quicker comments and lighting-fast liking, Facebook's coders built out an automatically updated story banner to "bubble up" the newest stories without refreshing.

The other most specific improvement is the ability to tap to open a photo "so you can quickly like and comment."

The Facebook world got faster with version 5.0 for iOS, quelling many of the complaints that plagued the app's buggy past. Android users should experience the same form of relief.

What's really exciting about the new app is what it means moving forward. Facebook claimed that now that the groundwork of a native code is in place, the app stands to become even better moving forward.