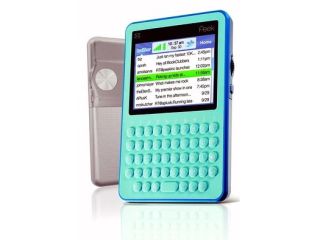 The TwitterPeek - better than a smartphone?

A new mobile device has been unveiled to give you direct access to Twitter - and nothing else.

Similar in form to Amazon's Kindle, the TwitterPeek is a full QWERTY-enabled device exclusively used for sending and receiving Tweets.

Dubbed the 'affordable alternative' to a smartphone (where nearly all handsets have some kind of Twitter app available) the TwitterPeek will cost $99 (£60) to buy with an $8 (£4.80) a month supplement.

However, if you're not one for rolling payments then you can pay $199 (£120) for a lifetime's subscription to the service, including the device (which, by the way, is clad in 'Twitter Blue').

The TwitterPeek has been designed by Arnol Sarva, founder of Peek, which specialises in low-cost email devices for those that don't want to pay for a smartphone.

"I'm sure it's going to get some attention because Peek is so controversial," said Sarva to the Wall Street Journal. "People don't understand there's a market for an affordable mobile email device and they don't understand this service is valuable and useful."

It's available now, and if you want an always-on Twitter device (and are happy to head over to the US to get one) then perhaps you're prayers might have been answered.