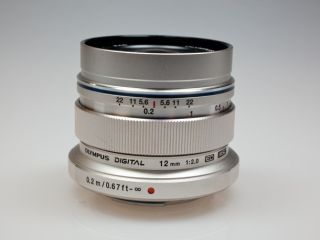 Using the lens' maximum aperture of f/2.0 allows for some creative shooting

The new M.ZUIKO 12mm f/2.0 lens was announced by Olympus at the same time as its new PEN line-up of cameras and is designed for use with the micro four-thirds mount.

Featuring an all-metal construction, the 12mm lens – which produces a view equivalent to a 24mm on a full-frame camera - has been billed as a 'street photography' lens.

The snap focusing ring around the centre of the lens barrel can be pulled back to reveal depth-of-field and distance indicators for use when focusing in manual mode.

The lens has multi-layer coating which promises to halve the effect of ghosting and flaring, compared with conventional coatings.

With an RRP of £700, this is a serious piece of kit to invest in. However, the lens is versatile, offering a maximum f/2.0 aperture allowing for creatively blurred backgrounds. The premium build associated with fixed length lenses is usually associated with higher quality images and with the range of subjects that this lens is well suited too, you may find it's hardly ever off your camera.