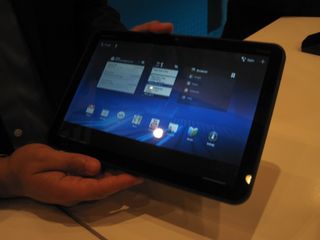 The move follows the announcement of Android 3.0 tablets at CES 2011, not least the Motorola Xoom, which you can see a whole load more pictures of here.

Google has also posted an update on the new mobile OS on its mobile blog, and you can see the video at the bottom of the page.

"Honeycomb is the next version of the Android platform, designed from the ground up for devices with larger screen sizes, particularly tablets. We've spent a lot of time refining the user experience in Honeycomb, and we've developed a brand new, truly virtual and holographic user interface."

Having seen the UI in a demo version on the Motorola tablet, we can confirm that it looks rather good – and it's a completely different experience than older versions of Android that we've so far seen on tablet-like devices – and we like the sound of the tabbed browsing in Chrome, too.

"Many of Android's existing features will really shine on Honeycomb," continues Google. The new OS also features "refined multi-tasking, elegant notifications, access to over 100,000 apps on Android Market, home screen customization with a new 3D experience and redesigned widgets that are richer and more interactive.

"We've also made some powerful upgrades to the web browser, including tabbed browsing, form auto-fill, syncing with your Google Chrome bookmarks, and incognito mode for private browsing."

"Honeycomb also features the latest Google Mobile innovations including Google Maps 5 with 3D interactions and offline reliability, access to over 3 million Google eBooks, and Google Talk, which now allows you to video and voice chat with any other Google Talk enabled device (PC, tablet, etc)."