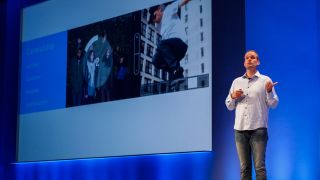 Shiels: the future's bright for our fans

You won't be able to upgrade any existing handsets when Windows Phone 8 comes out this autumn because too many of the new features rely on new hardware, like dual-core processors, new GPUs, NFC antennas and microSD slots.

Does that mean if you just bought a Lumia 900 that it's obsolete already? No, and the Finnish firm isn't abandoning existing users, Nokia senior vice president Kevin Shields told TechRadar at the Windows Phone Summit.

Get a Windows Phone now, and it's terrific.

"We have a commitment to customers; I want to know I feel good about what I'm walking into the store to buy. You walk in the store today and buy a Lumia 800, 900, and you're getting a great deal and a terrific experience.

"Through the lifetime of that device you're going to realise a great reward independent of this new kernel thing. So waiting, to me, is a silly idea. Get a Windows Phone now, and it's terrific. If you want to wait to pay more, be my guest. You wait six months - and then wait another six months, because there will be something else. It's the way of the world."

Windows Phone 7 users aren't being left completely out in the cold: while it's not a Windows Phone 8 upgrade, the new over-the-air updates mean you'll be able to get the latest software without waiting for mobile operators to approve them. Nokia acknowledges this will make it easier to try to keep Lumia users happy.

Nokia is also trying to keep users happy now: the new camera app with burst mode and group shot features and PlayTo DLNA streaming will be in the Marketplace by the end of June.

But, in a nod to the 'old way of working', because the updates that bring Internet sharing and flip-to-silence to the Lumia 710 and 800 have to be approved by operators they can't be more precise with the release date than saying 'from June 27'.

"We're really excited about this because it makes it a lot easier to deliver value; it means our probability of getting our innovation through to users goes way up," added Shields.

Windows Phone 7 will get more updates after these. "We're trying to do two things at once," Shields told us; "One is responding to customer feedback. This Counters [data counting] app is from customer feedback, especially in emerging markets; asking us to help them understand, give some knowledge of what's going on with my data, voice and messaging costs.

"Contact Share. It's kind of a small thing but we're going to release an app where you can send a contact from one phone to another using vCard. Just another thing that customers have been saying 'hey, it's missing from Windows Phone, let me have it'.

"That's one end of the spectrum. On the other end, we have a bunch of assets that we want to leverage. With Drive, we have an asset - the best navigation data on earth, period. Nokia Music is freaking brilliant; it works great, people love it so we are investing in that.

"It's the world's second largest music catalogue. We deliver to you great streaming music right out of the box.

"You don't have to set it up, log in, do some stupid thing… it's like boom, done! I use it to discover music."

After missing a concert, Shields wants to see more features for finding live music (which he demands with his trademark enthusiasm).