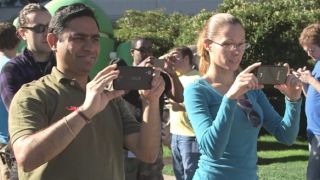 He needs to have a break...

Google officially announced this week that the latest iteration of Android will go by the name of Android KitKat, but it also may have let something else slip as well.

In a commercial for its sweet-flavoured operating system, Google revealed what seems to be the long-awaited Nexus 5.

There has been much rumour about this handset, with supposed leaks stretching back to March of this year. But this is the first time we have seen the fifth iteration of Google's phone in the wild.

The new handset, shown off in the 38 second advert, looks to be equipped with a large camera and finished off in matte black.

There is also a LG logo on the rear, which would make sense as LG is the rumoured handset manufacturer for the so-far unannounced phone, and the current maker of the Nexus 4.

The video has now been taken down by Google, which has led to further speculation that this is indeed the Nexus 5 and not just a Nexus 4 with a fancy case on it.