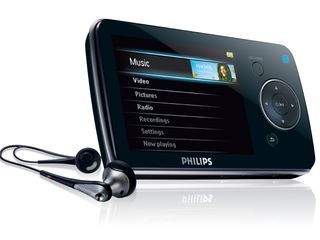 The Philips SA52 portable media player - easy to mistake for a handgun?

The Daily Mail has reported how a man was followed, stopped and surrounded by armed police after they were led to believe that his Philips MP3 player was a handgun.

The incident took place Stoke-in-Trent as 28-year-old Darren Nixon was on the final leg of his way home from work, having just taken a bus across the town.

"I got off [the bus] and started walking. I saw this cop gesture at me and at first I couldn't hear what he was saying. I turned the music off and they were telling me to put my hands up in the air.

"As I got closer I could see that two of the cops had guns. There were two police dogs there as well. I was searched at the scene then hauled off to the station and interviewed.

Stoke police later revealed that a woman had telephoned them claiming to have seen a man wielding a handgun and were duty bound to follow up on her description of the suspect involved.

"The description was extremely good and if that's the report we get we have to act quickly”, said a police spokesman.

Mr Nixon, who has no previous criminal convictions, was later released without charge, but only after he was made to provide DNA and fingerprint samples.