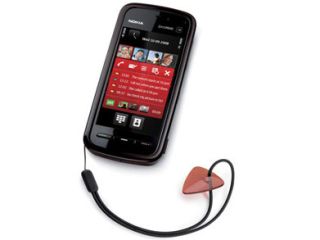 Members of the public have been voting with their feet as 150 people braved the cold and rain to get their hands Nokia's first proper touchscreen phone, the 5800 XpressMusic.

Nokia must now be a happier company than it was earlier in the week. Profit results weren't good and things looked a bit grim for the Finns. But luckily the launch of the new phone might have perked things up a bit with queues stretching around the corner of Regent's Street for the new handset.

The Finnish company might have been a bit cheeky by offering decent festival tickets to the first 100 customers tickets to the Benicassim festival in Spain, but still, 150 punters is a not insignificant number to attract for a handset that's already been over-shadowed by its bigger brother, the N97.

Some members of the queue had been standing there for around 8 hours before the store opened at 8AM to let the first people in the country get their hands on an official 5800 XpressMusic.

People were obviously excited about the new handset, with one man stating his reasons "I like my electronics. It's good value for money, it's 100 pounds cheaper than the iPhone," he said to NokNok.tv.

Apple must have been a little grumpy with the queue stretching around the corner right in front of the veritably desolate Apple Store just across the road.

The rumour on the underground is Nokia was hoping to get around 200 people in the first hour of opening, which it presumably didn't meet. Still, it beat the 40 or so that queued for around an hour for the T-Mobile G1, so Android lovers should vote with their feet for the next big handset to come with the OS.