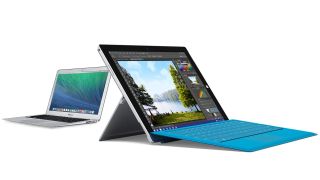 Microsoft's Surface Pro 3 and its nemesis, the MacBook Air

MacBook aficionados, Microsoft wants you to consider its Surface Pro 3 hybrid tablet/laptop as a potential alternative. Its marketing team has put up a microsite that aims to convince those mulling a move to bite the bullet.

The resource centre walks any prospective switcher through four steps (discovering Windows, discovering Surface Pro 3, moving your content and making the Surface Pro 3 interact with the rest of your Apple ecosystem).

Microsoft debuted its Surface range back in 2012 and it has proved to be a relative success given that Microsoft released two subsequent iterations. It has however yet to release the successor to the Windows-RT-powered Surface 2.

What Microsoft's tablet convertible has done though is pave the way for other similar products such as the Asus Transformer TX300, the Acer Aspire Switch 10 or the Schenker Element 10.1.

Check our review of the Microsoft Surface Pro 3.