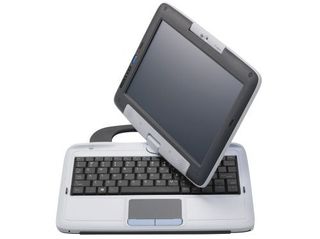 Intel has announced a new convertible version of the Classmate PC at CES. The new design cleverly converts from a clamshell to a Tablet and even features a touch screen.

According to Intel, the 180-degree swivel design, rotational camera and touch screen display will encourage more classroom interaction and collaboration.

The new convertible design will coexist with the existing clamshell classmate PC.

The power of Atom

Powered by Intel's Atom processor, the convertible Classmate PC has been designed with students in mind. It's light enough for small children to carry and ruggedly designed. It also boasts a water-resistant keyboard.

When used as a tablet, the convertible Classmate PC screen has a clever 'palm rejection' feature that ignores the presence of a child's palm on the touch screen.

"Education is one of the best ways to improve the future for individuals, villages, or nations," said Lila Ibrahim, general manager of the Intel Emerging Markets Platform Group, which developed the classmate PC reference design.

"There are 1.3 billion school-age children around the world and of those only 5 percent have access to a PC or the Internet... With our announcement today, Intel continues its long-standing commitment to advancing education through technology to transform lives around the world."