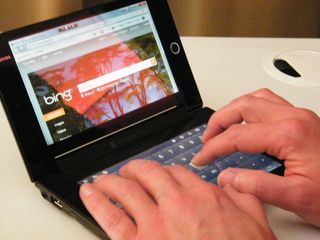 The mobile computing world is going through a state of flux at the moment and it all started with the netbook.

These dainty little machines brought to the mass market the idea that you can have a computer with all the functionality of a laptop which can fit into your bag with no unsightly bulge and without the back-breaking weight.

Then came the iPad, giving users the idea that you can have your netbook cake and eat it, while doing away with unnecessary things like keyboards, replacing usability with bit-sized functionality, in the form of apps.

When TechRadar was summoned by Toshiba to a secret press conference late last week which would show off the 'future of mobile computing' we thought that some sort of tablet device was just what we were going to see – bearing in mind Toshiba brought us the Journ,E just last year – but what was announced was something quite different.

The Libretto W100 takes its name from a now defunct range of Toshiba subnotebooks which, although launched back in 1996, were a precursor to the netbooks we see today.

This Libretto is another potential game changer – the world's first dual touchscreen laptop, which tests the Windows 7 OS to its limit.

Since the launch of Windows 7, we've never really seen how versatile its touchscreen capabilities can be. Yes, we've taken a look at touchscreen PCs like the Dell Studio One but the results haven't exactly blown us away. This is because multi-touch is usually best left for smartphones.

The Libretto, with its two 7-inch screens is closest thing to a smartphone we have used the Windows 7 OS on. And, we are not talking about a slim-lined version here, but full Windows Home Premium.

Because it is the full OS, The W100 is a tad on the chunky side. Once you clamp the clamshell exterior together it measures 30.7mm, which is thicker than you would hope for a device like this.

Next Page Functionality and use
See more Laptops news