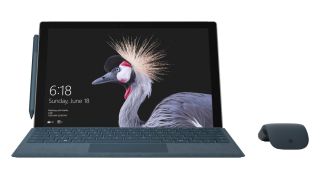 A number of press renders have leaked online showing the alleged successor to Microsoft’s Surface Pro 4 tablet, which it’s rumored will be called simply the Surface Pro.

Microsoft has not only denied a May 23 announcement date for a Surface Pro 5, but denied its existence altogether, which would make sense if it plans to drop the number for the next model in the series.

Based on the renders, the aesthetics don’t seem to have changed all that much from the Surface Pro 4, typical of a refresh and minor release. A number of accessories for the tablet will reportedly be available in multiple colors, including a stylus, keyboard and mouse.

The official launch will come with Microsoft’s event in Shanghai on Monday, May 23, but you can check out the leaked renders below courtesy of VentureBeat.