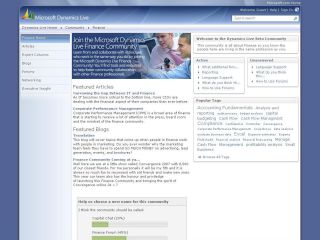 The yet-to-be-named online community will include blogs, forums, articles, columns, tagging, RSS syndication and other features

Microsoft is to launch a MySpace -style community website for financial workers all over the world. The company announced it plans at the Convergence 2007 conference in San Diego this week.

Aimed at finance managers, finance staff and accountants, the yet-to-be-named site is currently known as the Microsoft Dynamics Live Finance Community , and is the first in a planned series of online communities for users of Microsoft's Dynamics applications.

"You can think of it as the MySpace for financial professionals," said Satya Nadella, corporate vice president of Microsoft's Business Solutions group at the conference. "It's how you can have a Convergence show 365 days a year."

The online community will include blogs, forums, articles, columns, tagging, RSS syndication and other features specific to various communities.

Microsoft said it has long been investigating how the social networking technology, still mostly aimed at teenagers, "could be applied to a business setting".

While Microsoft has created the framework for the site, it plans for it to be run by the community using it, Nadella added. The company is even encouraging the community to vote on what to call the site. So far, 'Finance Forum' is in the lead, followed by 'Net Knowledge' and 'Capital Chat'.