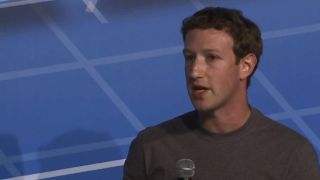 Facebook CEO Mark Zuckerberg is at MWC 2014 making the case for connecting everyone in the world to the internet, and he also dropped a revealing line about his company's pricey new purchase.

Jaws dropped when news broke last week that Facebook spent US$19 billion, or about AU$21 billion, on mobile messaging service WhatsApp, but Zuckerberg may have under paid.

"I think by itself, it's is worth more than [US]$19 billion," he said of WhatsApp. "In reality, there are very few services that reach one billion people. It could be the one service that reaches one billion and doesn't become valuable. If we can do a good job at helping WhatsApp to grow, then I think it's quite a good bet."

By Facebook's count, WhatsApp is on its way to connect one billion people. It's not there yet, but Zuckerberg seems 21-billion-dollars confident that Co-Founder Jan Koum and Co. can deliver.

Zuckerberg spent most of his time on the keynote stage talking about Internet.org, an initiative spearheaded by Facebook to make the internet affordable and accessible to those in developing nations.

WhatsApp seems destined to play a role in that.

"I'm excited [about WhatsApp] because of the Internet.org vision," Zuckerberg said. "By being a part of Facebook, WhatsApp can focus purely on connecting more people. If independent, they would have to focus on building out their own company. What Jan is excited about is for them to connect one, two, three billion more people."

Earlier Zuckerberg noted that in order to connect everyone to the web, Facebook needs to form partnerships "because we can't do it by ourselves." With connectivity, people have access to things like basic financial services, health information and resources like Wikipedia.

Facebook's goal for Internet.org is to "create a sort of on-ramp to the internet," one that can bring non-bandwidth sucking text-based services like Messenger to all corners of the world. Zuckerberg said the venture will probably not be profitable in the short term, but then again the company doesn't seem to concerned about near-term losses for long-term gains.

And the Snapchat question

There was one white elephant in the room someone just had to ask Zuckerberg, and that was whether Facebook will make another run at Snapchat.

"After buying a company for [US]$19 billion, you're probably done for awhile," Zuck quipped.