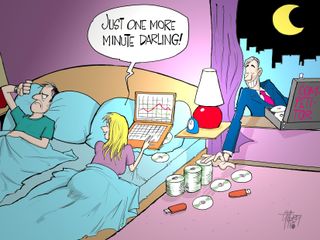 Hanky-panky or Excel? You decide...

According to a new survey a quarter of Brits use mobile smartphones and laptops to work in bed, much to the alarm of security-obsessed IT departments (and much to the annoyance of their spouses).

The survey, carried out by data security specialists Credant, claims to uncover that "a staggering number of obsessed workers are taking their laptops to bed, much to their partners annoyance."

57 per cent of bed workers work in the sack for "between 2 and 6 hours every week," and unsurprisingly "their bed companions found their partners' obsession with their mobiles 'a very annoying habit'."

Credant's press release continues: "A staggering 8% of people admitted that they spend more time on their mobile devices during the evening than talking to their partners!"

The survey may well have been skewed somewhat though, as it was based on the responses of 300 city workers "interviewed to determine whether the UK has become a nation of work obsessed, laptop dependent, key tappers and to highlight the security implications of unsecured mobile devices."

But even while the survey is based on a small sample size and is clearly skewed towards highlighting the security implications of using data on unsecured networks and devices ("snooping neighbours or even malicious infiltrators could hack into the devices that are being used in bed") it throws up an interesting modern phenomenon.

Michael Callahan, Vice President at Credant Technologies explains "This survey confirms that there is a growing population that is no longer restricted by working hours or confined to the office building itself. People are mobile and will work anywhere – even in bed."

When asked "What is the last thing you do before going to sleep" 96 per cent of the people questioned said it was to kiss their partners goodnight. Of the remaining four per cent (71 per cent of which are male), "who confess to completing work and checking their emails it would be advisable for them to take a long hard look at their gadget obsessed lives."