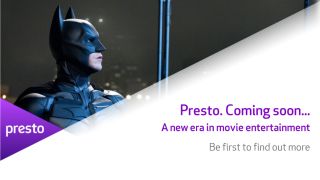 Another streaming service from Foxtel. This time JUST for movies...

Movie buffs rejoice, Foxtel finally has an on-demand service just for you, without the need to buy in to any other Foxtel channel or sign any year-long contracts.

The new service, called Presto, will cost $24.99 a month and will offer films either live or on demand.

Initially, Presto will only be available to PC and Mac users, but with plans for it to become available to Android and iOS tablet users later.

Internet on the rise

Also a month-to-month offering, Foxtel Play however comes in four genre-based packages, with one package to cost $25, two to cost $35, $45 for three and $50 for all four. For the movies package, you'd have to pay an extra $25 on top of having at least one of the genre-pased packages.

"Presto is the next major step in offering customers a product that's just right for them," said Richard Freudenstein, Foxtel Chief Executive.

"Presto will be a great online service for movie lovers with streaming through an intuitive interface and great movies backed by curated collections, recommendations and critics reviews."

The announcement of Presto comes just a month after the launch of EzyFlix.tv, another on demand IPTV service that will be offering films, television shows and UltraViolet storage.