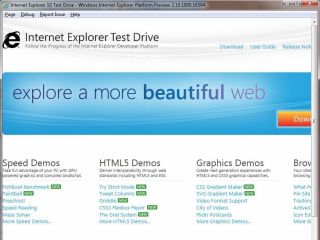 Microsoft has announced the availability of Internet Explorer 10 Platform Preview 2, as it continues to develop its next-generation browser.

With IE9 all about bringing the 'beauty of the web' IE10 is aiming to add a little bit more makeup and maybe some blusher, with continued integration of HTML 5 and support for more interactive web applications.

IE9 has been something of a hit for Microsoft, with a renewed focus on speed and simplicity and the adoption of key standards like HTML5.

The browser war has never been feistier, with the likes of Google Chrome and Apple's Safari battling against Firefox and Internet Explorer to capture more market share.