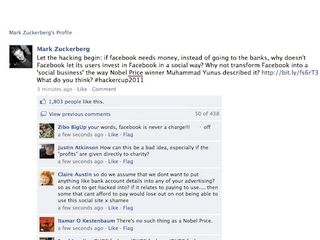 Even Mark Zuckerberg is not safe

As the CEO of Facebook, you'd think Mark Zuckerberg's fan page on the social network would be the safest of all; but today saw it hacked by parties unknown.

The fan page, which has nearly three million 'likes', seemingly posted a message calling for Facebook to transform into a 'social business'.

However, it was neither Zuck nor his PR team who posted the status, which was swiftly removed (but not before over a thousand people 'liked' it).

The status update was hashtagged '#hackercup2011', an annual competition in which hackers compete to solve puzzles for "fame and glory".

It looks like one hacker certainly deserves a special commendation for the act, although it's not really in the spirit of the thing.

The hack raises serious questions about Facebook's security, particularly as we store more and more information about ourselves on the networking site. It comes after recent concerns prompted Facebook to back down over sharing users' data with advertisers.

While it's unknown whether the hacker actually did anything more sophisticated than guess the password for Zuckerberg's fan page, the fact that such a prominent user can be hacked is worrying to all Facebookers.