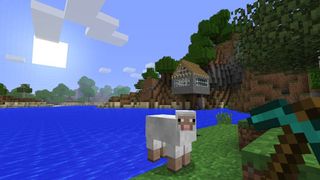 Imagine this on a much larger screen (but real)

It looks like Warner Brothers and a producer of The Lego Movie are set to work on a Minecraft film - but unlike The Lego Movie, the Minecraft movie will be ... live action.

Sounds far-fetched enough, considering there isn't actually a story to the blocky world and the pickaxe wielding Steve, but Markus Persson a.k.a. Notch tweeted the info himself stating: "Someone is trying leak the fact that we're working with Warner Brothers on a potential Minecraft Movie. I wanted to be the leak!"

This movie will probably take a long time to see the light of day, but at least you're prepared now to face Steve the human attacking real cows, pigs, zombies and perhaps traveling to the Nether?

For further randomness, see our blips - seriously, it's a treasure trove of weird.