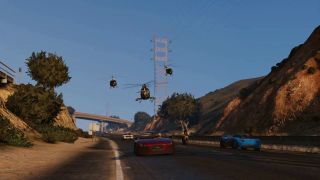 So, where are we heading next then?

Aside from a brief visit to London, the Grand Theft Auto series has remained comfortably based in the US, but that may change in the near future.

Speaking in an interview with TechRadar, Rockstar North's art director Aaron Garbut explained that he was interested in exploring a number of other places around the globe, though American culture has continued to appeal greatly to the team.

"That's not to say we'll never explore more of the globe," he said. "There are so many amazing locations I'd love to explore that have incredible amounts of character."

Garbut fleshed out a little more about why the Grand Theft Auto franchise has been so fixated with America to date.

"Many of us making the game grew up when American culture and American TV were all encompassing." he said. "America was entertainment and we were massive consumers of American culture through film, music and TV.

"Thanks to the success of American cultural export it's also a common ground for the rest of the world, it's something we can all relate to in some way."