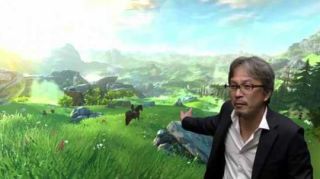 Zelda wasn't the only new Nintendo game at E3

Pac-Man's presence in the new Super Smash Bros. wasn't the only secret Nintendo unveiled during E3 2014.

The game is set in a Victorian London during a fictional "age of steam," and features a team of steam-powered heroes rallied by Abraham Lincoln to fight off an alien invasion.

Try not to think too hard about it, and just be glad Nintendo has announced something new.

It's also great to have a new title from Intelligent Systems, a storied first-party Nintendo studio most recently responsible for games in the Fire Emblem series.

Prior to the Code Name: S.T.E.A.M. reveal Nintendo fans speculated the new 3DS game might be anything from a new Metroid title to a new Advance Wars game.

While it's not Advance Wars, it is from the same developers within Nintendo. But with its over-the-shoulder perspective and squad-based combat S.T.E.A.M. plays more like the recent XCOM games or the 2008 game Valkyria Chronicles.