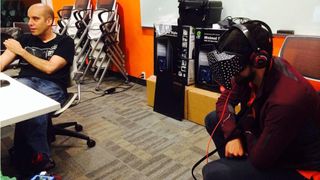 But we're still no closer to a consumer release...

Pictures are starting to turn up on social media of a new Valve virtual reality headset, with developers at a Boston-based VR meetup given the opportunity to go hands on with the unit.

A Reddit user collated a number of photos posted on Twitter (shown above) of developers using the new Valve headset at the recent Boston VR Bender meetup.

Valve reportedly demoed the prototype to those who attended, but as yet, the company hasn't officially released any details of this new headset.

The new Valve prototype is reportedly more portable than the previous model, was demoed a few months back at the Steam Dev Days to largely positive feedback.

This new prototype has an external casing with what is assumed to be trackable spots on all surfaces, while photos from the Boston event show a desk mounted camera that presumably works with the headset to provide tracking information.

Valve has previously said that it has no plans to release a consumer VR headset any time soon, instead focusing on helping other VR manufacturers, like Oculus to get off the ground.

Via: Road to VR