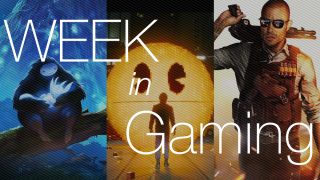 So, imagine the bit from Taken where Liam Neeson is all like "I don't know who you are, I don't know what you want, but oooh I'm gonna find you and stab you in the face, pull out your optic nerve and turn it back around so you can see me deep frying your ears"?

I do. I remember that bit from the time I totally saw Taken, the film where Liam Neeson threatens people with quite unpleasant torture and death. Anyway, imagine that, but it's me instead of Liam Neeson, and instead of the guys on the other end of the phone in the film, it's whoever decided to have Rezzed the weekend before St Patrick's Day. Seriously, I will find you, and I will turn your ears into crispy appetisers.

I'm not saying I'm writing this with a lethal combination of post-Rezzed flu and a 2-day hangover, but… well, I am. Let's continue. First up on our Magical Mystery Tour of games news is the incredibly exciting announcement from Nintendo that they're doing mobile games. Honestly, it's like having a friend that says they never, ever want to have children, and then the next time you see them they're pregnant with quintuplets.

Nintendo have been memorably reluctant to delve into the mobile market, with people on one side of the argument saying that Ninty need to get with the times. The other side argue that their childhood needs to be preserved, and Nintendo doing mobile games would instantly destroy all of their gaming memories.

But it probably won't. In fact, if anything, it will bolster your own childhood memories while creating millions more for new, current children. And it will make Nintendo loads more money, so they can make more games, so that MAYBE, FINALLY we can get that new-gen Pokemon Snap we've all been waiting for. In fact, wouldn't Pokemon Snap be great on a phone? Just think about that for a bit, and then come back if you're still worried.

Still, the haters have well and truly hated this week.

Speaking of things we're worried about, have you seen the trailer for Adam Sandler's video game film, Pixels? It's SO bad. Imagine an ageing comedian suddenly realising his comedy might be obsolete to the younger demographic, panicking, seeing a very tasteful and appealing short film and thinking "YES. This is what I need to appeal to the youths!"

Then, add on a load of unnecessary CGI, a nonsensical plot about misinterpreting video games as a declaration of intergalactic war, even more ageing stars, including the fabulous Peter Dinklage and Jane Krakowski who really should know better, and a completely cringeworthy script that involves Sandler saying the line "Pac-Man...is a BAD GUY?!" like he still thinks this might get an Oscar nom.

Oh, and a small, embarrassing cameo from a guy playing the creator of Pac-Man, Toru Iwatani, which makes us so sad. So very, very sad. The problem here is that the film appeals to roughly no one, because the cross-section of retro gamers and people who can sit through a modern Sandler film is rapidly dwindling. Also, it's been done better by Futurama and Wreck-It Ralph. Soz, Sandler.

Finally in this week's news round-up, it's time to talk about games. This week saw the release of the lovely Ori and the Blind Forest on Xbox One and Microsoft windows. It's a game with style up the wazoo, a live orchestral soundtrack and platforming worthy of the toughest button-mashing, wall-jumping pros. It's so, so worth a play, but if you have ever cried at a Disney film, please do make sure you have tissues handy for at least the first 20 minutes.

Next week, we'll have Battlefield Hardline in our grubby mitts, but from this week onwards you can play up to ten hours if you've got EA Access. It's a game about the po-po. You are the po-po. You're given truncheons, guns, handcuffs and a nice lady police partner, and set on your way. Will you handcuff bad guys? Or will you just shoot them in the face, which is sort of the easier option? Is this a statement about police brutality? You decide.

That's all for this week, then - I'm off to attempt to destroy any copies of Pixels I can find before anyone has to go through the indignity of watching it.