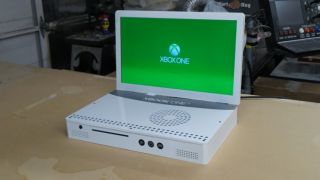 Bought yourself a shiny new Xbox One S yet? We doubt you've done anything as impressive with it as hardware hacker Edward Zarick has: he's stuffed Microsoft's slimmed-down console into a laptop shell and added a fold-down screen.

It's not a true laptop - you still need a power supply at all times - but it's still an impressive bit of modding from Zarick, who previously performed the same trick with a full-size Xbox One. Oh, and he's also combined a PlayStation 4 and Xbox One together in the same machine as well.

The 19-inch Samsung screen runs at a 720p resolution, but you can still connect up an external monitor if you need more pixels for your gaming. Zarick will actually build one for you, if you're prepared to fork out $1,495 (about £1,150) plus shipping for the 500GB model. Add $50 (£40) for the bigger 1TB console.

Alternatively, enter the competition Zarick is running to win one for free and enjoy the freedom of being able to take your Xbox One S console anywhere - as long as there's a spare power socket available.