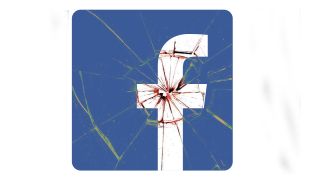 Between data scandals, apologies, updates, and congressional hearings, Facebook and Mark Zuckerberg have been juggling quite a lot recently. It’s unsurprising, therefore, that reports have recently emerged that the social media Goliath is delaying the reveal of its home smart speaker.

However, in a somewhat poetic instance of information being released before it’s wanted, a recent patent application has revealed what Facebook’s smart speaker may look like. Titled ‘Electronic Device’ and filed in December 2016, the patent reveals more about what the speaker looks like rather than any information on its internals or features.

Shown from all angles, the device’s top appears to have the main speaker with nothing else of interest. It’s been rumored that Facebook’s smart speaker will be jumping into the home assistant game already equipped with a screen but there isn’t any obvious sign of one here.

Some have wondered if figure seven on the patent depicts a screen with buttons underneath but the fact that this part of the patent is labelled as the bottom side makes this seem somewhat unlikely.

Unless the speaker is intended to be positioned vertically rather than horizontally, in which case a screen here could be possible where it would sit like the Amazon Echo Show with its speaker on the back rather than beneath the screen.

Regardless, given this is a patent filed in 2016, there’s no guarantee that this is what the finished product will actually look like and Facebook could have made many changes to its design in the meantime. It’s not entirely clear when Facebook will unveil its smart speaker at the moment but any time in the immediate future doesn’t seem likely.