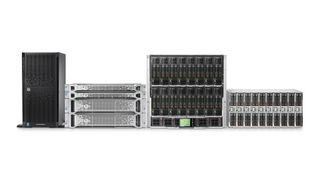 Budget conscious small and medium sized businesses have a couple of new server options from HP as part of its growing Compute portfolio.

The two new tower servers take the form of the HP ProLiant ML10 v2 and ProLiant ML110 Gen9 with prices starting at just $300 (around £203, or AU$393) and providing increased productivity and reduced overall costs.

ProLiant ML10 v2 is an entry-level 10 series tower server with an incredibly low initial price for those looking to tighten the purse strings. It has a large number of connectivity slots for both storage and networking, and is ideal to run general purpose applications.

The ProLiant ML110 Gen9, meanwhile, is a 100 Series tower server with more memory, hard disk drives and I/O expansion. It is also optimised for small businesses physical and virtual workloads and applications.

ProLiant Tower servers are also incorporated into certain HP Just Right IT solutions for SMBs that include HP servers, storage, networking and services all configured with applications from HP partners. They can also be added to with various HP Qualified hard drives, memory, storage controllers and network adapters.