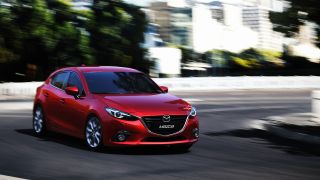 Slinky looks and snazzy tech: The new Mazda 3 ticks all the boxes

The VW Golf and Ford Focus competitor also gets a new connectivity and multimedia system, complete with a centrally-mounted touchscreen, a head-up display and obligatory social media support. Yup, it's in-car Facebook and Twitter again.

The Mazda was launched at simultaneous international events in London, St Petersberg and Istanbul, yesterday. We were up in ye olde big smoke in Blighty.

Anyway, the point is that the new 3 is a very big deal for Mazda. Over 3.5 million have been flogged since the original 3 was launched a decade ago. Recently, the 3 has represented half of Mazda's production volume.

Put another way, this thing had better sell. Failure is not an option. And that's why the new Mazda 3 is getting the full Skyativ treatment. Skyativ is Mazda's take on officiency and low emissions.

Unlike some competing brands, which tend to tout one or two key technologies, Skyactiv is a more holistic approach. It includes everything from lightweight body structures, to innovative combustion engines and even a philosophy for running the company itself and its manufacturing facilities.

As Jeff Guyton, head of Mazda in Europe told us, "Skyactiv makes Mazda itself more efficient."

Of course, you could argue that Skyactiv is just marketing spin for what just about everyone is doing. Speak at length to any of Mazda's competition and they'll tell you about efforts to reduce weight, to improve their engines and rethink they way they go about making cars.

The notion of expressing motion

So is the new Mazda 3 something special or just conventional hatchback that represents another incremental step forward? It certainly looks good thanks to Mazda's Kodo design language. Kenichiro Saruwatari, the Mazda 3's programme manager says the idea is combine a "stunning first impression" with genuine "appeal over time".

The Kodo design language is based around a notion of expressing motion in a static car body and it's yet to produce a dud. The 3 is a bit of a stunner in the metal.

Thanks to extensive use of high tensile steels, the lightest Mazda 3 is under 1,200kg, which is far from flabby given all the tech and safety kit on offer. Dynamically speaking, Mazda hasn't skimped, either. The 3 has fully independent suspension all round.

Engines-wise, it's the usual litany of frugal but slightly frumpy four-cylinder petrol and diesel lumps. Your choice ranges from 1.5l 100hp to 2.0-litre 165 petrols. You also have the option of a 2.2-litre 150hp diesel engine.

That said, it's worth noting the petrol engines are all relatively high revving naturally aspirated units. No turbos here. If the rest of the package adds up, that could be interesting for driving enthusiasts.

Mazda hasn't released CO2 or fuel efficiency figures yet, so we're somewhat in the dark regards the new 3's ability to deliver on the Skyactiv rhetoric.

As for the multimedia kit, the Mazda 3 is the first model to get Mazda's new touchsreen system. It's based around a 7-inch 800 by 480 pixel panel that floats atop the dash like a small tablet device in what is quickly becoming the fashion.

Functionality takes in basics including Bluetooth and USB connectivity. But the innovation, for Mazda at least, is the addition of internet connected features including Aha streaming audio as well as Facebook and Twitter support including text-to-speech feeds.

Then there are a suite of in-built apps that cover things like eco-driving and vehicle status. On paper, it's not ground breaking stuff, but it does bring Mazda up to date. Multimedia and connectivity was definitely becoming a weak point for the brand and this new system has a good shot at fixing that.

Our initial and very brief viewing suggests that the new system should be at least competitive. Unfortunately the launch event was something of a scrum and the hot seats were soon dominated by our European cousins bagging the best vantage spots with their metaphorical beach towels.

The other major in-car tech feature is a new head-up display that projects critical data onto the windscreen. We've not seen it in action, so we're not sure how or if it differs from HUDs already offered by other manufacturers.

While we're inside, the subjective sense of quality inside the cabin is impressive. The driver-centric nature of the design is pretty darn appealling, too. The new 3 looks like a nice place to spend time.

The final piece of the Mazda 3 puzzle is safety technology. Here again, Mazda is rocking the world with innovation. But it is now bang up to date courtesy of auto brake assist, radar cruise control, lane departure warning, adaptive headlamps and more.

Put it all together and you have a Gold and Focus basher that hammers all the major technology nails right on the head. It's a great looking car inside and out with a strong feature set. Hopefully, we'll get a full hands on and road test in the new 3 very soon.

There's no word yet on UK pricing, but the 3 goes on sale later this year.