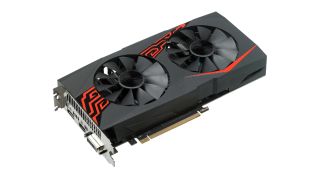 Asus has revealed a pair of new graphics cards which are specifically designed for those who wish to mine cryptocurrency such as Bitcoins with their PC.

The Asus Mining RX 470 (pictured above) and Mining P106 (see below) are built with the demands of virtual coin mining firmly in mind, engineered to give the maximum hash-rate performance for the cost of the card, and also manufactured to be able to happily run 24/7, as mining rigs tend to.

As you can probably guess, the Mining RX 470 is a customized Radeon RX 470 (with 4GB of video RAM), whereas the P106 appears to be a re-purposed GeForce GTX 1060 with no video output provided whatsoever (whereas the RX 470 does have a single DVI connector).

Asus claims that the P106 boosts the megahash rate by up to 36% compared to a normal (non-mining-specific) graphics card – essentially the amount of computations the GPU can perform in millions of hashes per second. The more performance here, the more chance you have of getting yourself some lovely virtual lucre in a shorter period of time.

An included GPU Tweak tool also lets users easily modify the voltage and clock speed, another boon in the quest to conveniently get the maximum performance levels possible from these graphics cards.

Unsurprisingly, both the RX 470 and P106 are built to be very durable so they can run around the clock, without issue. Asus says that they carry premium Super Alloy Power II components, and furthermore there’s some nifty tech which has been used with the cooling solution.

The fans on both cards benefit from a dual ball-bearing mechanism which means reduced levels of friction, and a claimed doubling of the lifespan of the fans. On top of that, they are resistant to dust, and certified in that respect to the IP5X standard. Oh, and they’re also whisper quiet, which never hurts.

How much will these GPUs cost? Asus hasn’t confirmed the price just yet, but we should find out soon, as both these mining models are expected to launch next month.

Note that the card we’ll see over here is the Mining RX 470, with the P106 only launching in China and Eastern Europe, at least initially.