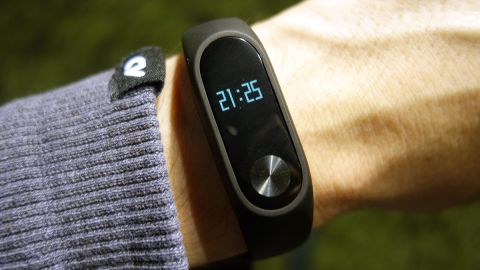 An excellent fitness tracker from Xiaomi, which combines a host of useful features with the standard tracking metrics at a really, really good price. On top of all that, the battery life is great, and the tracker is comfortable and lightweight to wear.

Any fitness tracker worth its salt covers the basics of tracking steps, distance and calories, and now even budget models are adding heart rate monitoring too, previously the exclusive domain of higher-end wearables.

With so many trackers offering a similar set of features, how do you pick the right device for you? Chinese tech giant Xiaomi has always tried to differentiate its wearables by offering them at rock bottom prices - the original Mi Band went for just $15 in the US - and it's looking to repeat the trick with the Mi Band 2.

Despite its low price, the Mi Band 2 brings with it just about everything you could want in a fitness tracker without straying into smartwatch territory: all the basics are covered, plus sleep tracking, movement reminders, and basic phone notifications. But is it enough to convince you to choose Xiaomi over Fitbit?

You'll struggle to find anything comparable for less. The Huawei Band 2 Pro is currently hovering around £50 or $70 online, while the Fitbit Alta HR, the Fitbit product that perhaps most closely matches the Xiaomi Band 2, is all the way up at £130 or $150.

The Mi Band 2 launched in 2016 which means you're likely to be able to get some very decent deals for it online. It also means the software and hardware has had time to become reliable and bug-free.

Okay, the Xiaomi Mi Band 2 looks cheap - but it doesn't look that cheap. The rubber strap is sturdy and actually pretty comfortable, the clasp system is strong and secure, and the actual tracker itself - which you snap into the strap - has the heft of a proper bit of clever wearable technology.

It may not have the looks of a Fitbit or an Apple Watch 3, but then it does cost a fraction of the price, so you pay your money and take your choice. It's certainly not an ugly device by any means, and the monochrome OLED display is crisp and clear.

There's one button on the front of the Mi Band 2, which you press to see the time and your other vital statistics.

We actually prefer the button approach to the alternative, where you have to wave your wrist around and hope the tracker detects the movement in order to wake up the screen. The Mi Band 2 can do this too though, if you enable it in the settings.

Black is your only option for the strap, though we have seen third-party straps in all kinds of hues. The tracker itself is easily removable, so presumably you can change up the color if you like, though we can't speak to the quality of these other straps.

What we can say is the Xiaomi Mi Band 2 is light and comfortable to wear. It can start rubbing by the end of the day, but no more so than any other fitness tracker or smartwatch that we've ever tested.