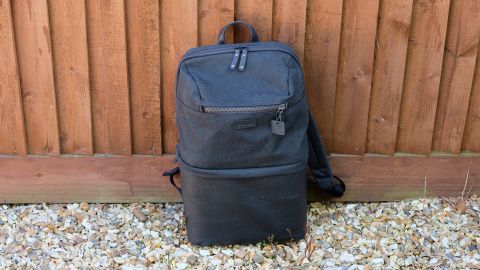 As ever with backpacks, there's no way to get to your camera without taking the bag off, and some of the zippers on our brand new sample were a bit stiff, but otherwise the Tenba Cooper DSLR Backpack is both smart and clever. It's slim, neat and comfortable to wear and holds more than its looks suggest.

Backpacks are great for carrying a ton of camera gear over long distances, but you’re not always trekking across the Andes when you go out taking pictures; sometimes you’re jumping on to a crowded tram, threading your way through crowds or having to push your camera bag under the chair at a restaurant.

Regular photo backpacks can be a liability as well as an asset, whacking bus passengers in the face as you turn, getting their countless straps and buckles caught up in doors and probably blocking the entire width of the average medieval Italian alleyway.

Very often, then, you want a backpack that’s a bit smaller, a bit neater and a bit more civilised for the urban traveller rather than the rugged outdoor explorer.

And that’s the point of the Tenba Cooper DSLR Backpack – and there is an even slimmer one for mirrorless camera owners with less kit.

This is a bag of two halves. The top half is finished in tough-feeling Cordura canvas and holds your regular day-to-day supplies. It’s big enough for a water bottle, some lunch and other supplies, and there are pockets stitched into the back for cables, disk drives, batteries and other essentials.

Right at the back is a lightly-padded compartment large enough for a 10-inch tablet. It’s a shame you can’t squeeze in a laptop, but that would have needed a full-height pocket, which would have hindered the backwards-hinging action that gives access to the lower compartment, which is where you store your camera gear.

This goes into a padded insert (which can be lifted out if you just want to use this as a regular bag). The insert has two vertical dividers to separate the insert into three compartments, with top sections which fold over to support a camera body with lens fitted, plus two other horizontal divider flaps for when you want to stack lenses, say.

You can pack in a DSLR, a couple of lenses, a charger and cable into the bottom compartment and plenty of day to day stuff in the top compartment too, and still the bag doesn't bulge out and start getting in the way.

It holds so much that it can get pretty heavy, which become obvious when you hoist it on to your back. Once there, though, the padded straps and padded 'Airflow' inserts make it comfortable to wear. There's no waist or sternum strap to stabilise it, but it's such a snug fit on your back that unless you plan on doing a lot of running or leaping, it's not a problem.

As ever with backpacks, however, access is another story. If you want to get at your camera gear, you'll need to take the bag off to open it. But here its flat base keeps it upright when it's on the ground, and it’s water resistant too, so don't have to worry about putting it down on wet grass.

The zips look tough, but they are stiff too. It could just be the newness of our test sample, but the zipper to open the bottom compartment was particularly stubborn. The zipper itself works fine, but you need to fold back the protective fabric 'lip' first to stop it snagging.

The zippered front pocket is really useful for putting a phone, sunglasses, keys or anything else, however, and the 'hidden' rear passport pocket is useful too.

Tenba has succeeded in making a smart, slimline urban backpack that's much more city-friendly than regular backpacks. It holds plenty and it's comfortable to wear, too.