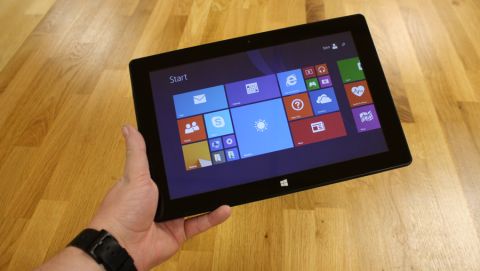 Whilst it may not be quite as much of a bargain as its smaller 8-inch sibling, the Linx 10 is still a nicely priced and capable netbook replacement.

I'll forgive you for thinking that Windows tablets are still clunky, overpriced, and the ugly ducklings of the tablet market, as just a few years ago this was most certainly the case. Whilst they may not have caught up with the Apple iPad or some of the more pricey Android tablets around such as the fabulous-looking Dell Venue 10 7000, they are most certainly hot on their heels.

Now that prices have significantly dropped, and Microsoft has dumped the woefully prohibitive version of Windows that was RT, Windows tablets are starting to become a purchase that warrants genuine consideration for many people.

The Linx 10 is one of this new breed, and at £160 (around $238, or AU$307), is not the very cheapest 10-inch tablet around, but it's not very far off at all. If you're thinking it looks rather familiar, well, that's because it is – the Linx 10 shares almost identical hardware with the Schenker Element 10.1 that we looked at back in September last year. Save for a minor spec bump in the processor department from a 1.33GHz Intel Atom Z3740D to the newer generation Z3735F, which can burst at faster speeds of up to 1.83GHz, telling these two tablets apart is a tough task indeed.

There's also an 8-inch version called the Linx 8, which despite the smaller package, features almost identical specifications (apart from 1GB less RAM), and it comes in at a very appealing £90 (around $134, or AU$173).

A third member of the Linx family is the 7-inch model which is even cheaper at £75 with the same specification as the Linx 8.

Setting yourself apart from the rest is a difficult task in the overly saturated tablet market, especially when there are identical counterparts sold under other brands, but that doesn't mean the Linx 10 isn't a robustly put together bit of kit.

Apart from a small amount of give in the chassis on the left-hand side where all the ports are situated, the Linx 10 feels solid and doesn't give off the vibe of a budget tablet.

Paired with the optional keyboard case which conveniently docks onto the foot of the tablet and holds it upright with an ingenious folding rear flap, this 10-inch variant of the Linx is most definitely an adequate replacement for the netbooks which were once so popular.

The left edge of the tablet is where all the action occurs, so things do appear a little crowded. Starting at the top we have the power/wake button, followed by a 3.5mm audio socket, mini-HDMI output, microSD card slot, micro-USB socket, microphone and the DC power socket.

In comparison to the smaller 8-inch Linx, the additional DC power socket is used to juice up the larger built-in battery, whilst the micro-USB socket is strictly for data only – Linx has had the foresight to include a USB 'on the go' cable so that you can plug in full-sized USB peripherals straight out of the box.

Linx has also chosen to increase the size of the HDMI output from the micro variant on the 8-inch model, to the mini version found here. Not that it really makes any difference – they both do the same job.

On the top edge, the volume bar sits at the very far left corner, which is easily accessible, and cannot be easily confused with the power/wake button – as is the case with many other tablets. I wish this device could have been given a more similar design to the Linx 8, as both the volume and power keys were significantly more tactile than on this 10-inch variant.

Turn the tablet round and you'll find a rear with the same rubberised plastic that is often used on slightly more premium devices which feels tactile, and not too slippy. The Linx logo takes pride of place in the centre, with a 2MP camera just offset to the right. In the top left corner, two speaker grilles give away the positioning of the stereo speakers – an odd placement that is surely limited by the internal hardware, as they would have been much more welcome spaced further apart – or even up front instead.

Still, small niggles aside, the Linx 10 is a well-designed – but not particularly inspired – budget tablet.

It may not be the thinnest tablet, or have the smallest bezels surrounding its 10.1-inch screen, but the Linx 10 still feels relatively compact, and is far from the chunkiest 10.1-inch Windows tablet around. Measuring 258 x 172.6 x 10.5mm (H x W x D), it comes in slimmer and not as wide as the Microsoft Surface Pro 2, albeit packing considerably less punch.