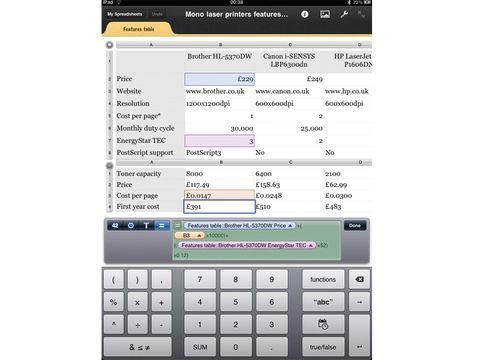 When Apple introduced Numbers on the Mac, it did something nobody had dared attempt before: produce a spreadsheet app that reflects what people actually use spreadsheets for.

Few people, we suspect, use Excel for high-level statistical and financial analysis, compared to those who think of it as an easy way to lay out a timetable or football fixtures list.

On the iPad, Apple has been similarly innovative, and Numbers is actually the most successful of the three iPad apps. Everything that makes Numbers good on the Mac is here; it's friendly, easy to use (once you find your way around the necessarily spartan interface) and tries as hard as it can to make the business of entering formulae unthreatening.

This is because the on-screen keyboard changes to reflect what task you're doing. Enter text, and it's a standard QWERTY keyboard; tell some cells that they're for dates, for example, and you'll get a special keyboard for picking dates; and when you're entering formulae, it changes again to help you do that.

And it's possible to do some pretty sophisticated analyses with Numbers' formulae, especially since referenced cells aren't listed with grid references but are colour-coded and take on the correct names scraped from the column and row headers.

The genius of Numbers on the iPad, though, is its Forms. Tap the + tab at the top of the screen once you've created a table of information, and you have the option of creating a form for easily entering information into that table.

It turns your iPad into what feels like a big clipboard, with the added advantage that all your data is being recorded in a flexible, analysable way, and we can imagine it being tremendously useful in schools, clubs, sport associations and so on. It's also a possible competitor to Bento if your database needs are modest.

It suffers from the same infuriating round-tripping process for sharing files with a Mac that bedevils all the iWork apps and there's no way to email a version of your spreadsheet in Excel directly from the device; you'd have to save it on the Mac version of Numbers.

At least Numbers documents seem to be more resilient in the translations when they're being punted back and forth between the Mac and iPad.