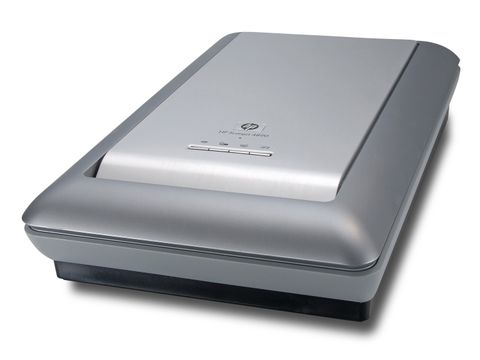 The 4890's 4,800x9,600dpi resolution and multiple-format film scanning abilities mean you're getting high-end specs at a mid-range price tag. But do these specs translate into performance?

First impressions are good. The lid has a smart, brushed steel finish and there's a handle for raising it to gain access to the platen. There are buttons on the top for quick scans, film, copies and email.

We did have a bit of trouble with the software installation. Eventually, the scanner was recognised; the secret seemed to be to make sure that the scanner was on and connected during installation. In retrospect, this seemed to be what the setup sheet was indicating, but it's an unusual way of going about things. You need to install the Image Zone package too, which is a hefty 100MB, and you can't get away with just the driver (the same applies to the 4370).

That aside, the 4890 is certainly fast, especially at unscreened scans of A4 pages and our 6x4 photo. The colour and greyscale magazine scans looked terrific. But while the colour magazine scan looked super-crisp from a distance, it soon became apparent why this was: the descreening option, although enabled, appears to have had no effect on the printer dots, which are rendered with immense sharpness.

The 150dpi unscreened scan was superb - as good as the Canon 9950's - which is perhaps confirmation that high-res scanners produce better low-resolution scans (from printed material at least). The 6x4-inch photo scan was top quality, as we'd come to expect.

The ScanJet 4890 is fast, sharp and affordable. It nearly matches the Epson 4990 and Canon 9950 for scan quality at more or less half the price - only its poor descreening lets it down.