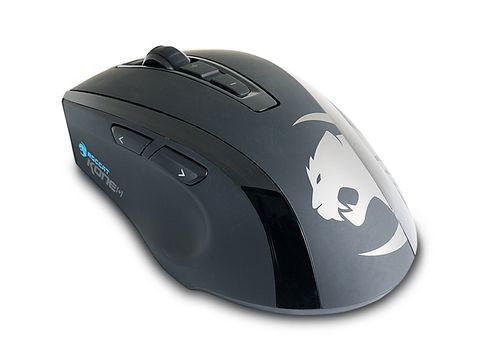 A worthy upgrade to the original Kone mouse

The first Roccat Kone mouse we checked out was way back in October last year, and now it's back and better than ever.

The design of the Roccat Kone [+] is essentially the same as the original Kone, all sweeping curves and ergonomics a go-go, but it's the innards that have had a good, old-fashioned tweaking.

The vanilla Kone comes in with a standard dpi limit of 3,200, whereas the Kone [+] weighs in with a hefty 6,000dpi maximum, putting it on par in response to the top-of-the-line mice such as the R.A.T. 7 or the Razer Mamba.

Profiles enable you to configure up to five different dpi settings within that rather extensive range. The secret to the other major addition to the Kone lies in the name, and in the impressive bundled suit of software.

The [+] in the title refers to the EasyShift [+] button offered by the mouse's drivers. Essentially it acts exactly the same as the shift button on your keyboard, offering secondary functions for each of the programmable buttons on the device. It's easily set up in the quality software interface, and by default comes configured to look after some Windows functions such as audio volume and muting.

The Roccat driver suite also comes with the same TCU surface calibration the original Kone came with, and is still just as nifty.