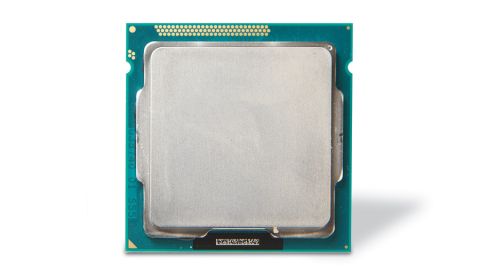 The Intel Ivy Bridge technology is the finest desktop processor tech this side of Haswell, and for the PC build without severe budgetary constraints, it's the architecture we're telling you to stick into your gaming rig.

But what are those of you on a budget missing by dropping down the IvB stack to the i3 range, and would we still recommend Intel over AMD at this price point?

The current Core i3 range of CPUs is the real entry point for getting Ivy Bridge. At £100, this Core i3-3225 is at the budget end of the spectrum, though it isn't the cheapest on offer. You can pick up other i3 chips for less than a ton, but then you're dipping below the 3GHz mark and missing out on the top end of the Ivy Bridge HD graphics.

The i3-3225 comes with a decent 3.3GHz clock speed and the top HD 4000 graphics. As is the way with i3 chips, this is a dual-core CPU, but unlike the i5 range, Intel has turned HyperThreading back on.

What you don't get is any K series goodness at this unfashionable end of the Ivy Bridge table. That means you're stuck at 3.3GHz, so the legendary overclocking prowess of the Intel tech is completely lost on the i3 market.

That's a massive shame for the eager budget overclockers, but Intel obviously doesn't want anyone getting i5 performance out of an i3 chip, even if it has to introduce artificial barriers.

In this price range you can take your pick of the competition - AMD has three different options for around the £100 mark and that should give pause for thought for even the most ardent Intel fan.

First off there's last month's new AMD offering, the Trinity A10-5800K, which is the alternative for anyone who's looking for integrated graphics performance. The HD 7660D graphics in the Trinity chip outperforms the HD 4000 on the Intel side by a huge margin - we hit 27fps in Batman: Arkham City at 'v high' settings at 1080p. The i3-3225 barely managed 16fps.

In terms of CPU performance the i3 has the edge, but with a little overclocking of the AMD chip you can close the gap.

The i3-3225's general CPU performance is pretty good, but when you consider the similarly priced AMD chips - with access to overclocking - it starts to look a little off the pace. It will still keep a decent GPU filled in games though.

For us, the real competition for this i3 chip is the six-core FX-6200. For the exact same price as the i3-3225 you get another two cores for your cash and that makes for much higher multi-threaded performance. Again, the AMD chip can be overclocked where the Intel can't, putting the 6200 almost on the same CPU level as an i5 at stock speeds.

So, the question I posited earlier regarding our recommendations at the budget level is actually an easy one to answer. There are really two options here, but neither of them is Intel-based.

If you're not going to let a discrete card anywhere near your PC then the Trinity chip will deliver almost gaming-capable performance on its own, and the FX-6200 will defeat the i3-3225 in most tests. It's close at stock speeds, but the Intel chip falls behind when you start to consider the impressive overclocking performance of the AMD chips.