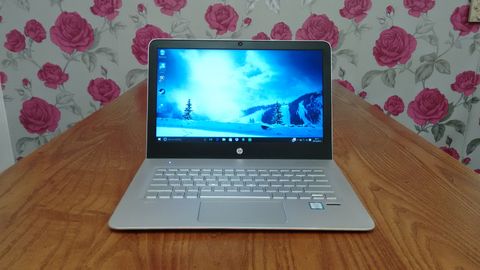 We were wowed by the thinness, responsiveness and overall design. However, a few niggles such as the touchpad, odd-shaped Enter key and disappointing battery life prevented this laptop from scoring higher.

HP has made one of its thinnest laptops yet. The HP Envy Notebook 13-d002na clocks in at a measly 12.9mm high undercutting the fat edge of a 13-inch MacBook Air by some margin – 4.1mm to be precise, and this HP offering is also only 10 grams heavier. Recently unveiled at CES 2016, the 12.4mm-thick EliteBook Folio G1 is the only other HP model to sport thinner dimensions.

Under the hood there's the new Skylake i7-6500U processor, just one below the flagship CPU in the fleet, the i7-6600U. For £800 (it's priced at $1,050 in the US, which is around AU$1,500) this is not to be sniffed at. Dell's XPS 13 with a similar configuration (boasting an i7-6500U and a 250GB SSD) is considerably more expensive at £1,280 (around $1,836). Admittedly the Envy doesn't include a touchscreen but many workers and students who just require a solid, reliable and hard-wearing laptop can save money by plumping for this.

It is however more pricey than the much coveted Asus Zenbook UX305 which also features a full HD screen, but with a much improved battery. The UX305 teeters around the £530 mark (around $770, AU$1,100; of course, much of this is due to the CPU – the Asus we reviewed features a Core M 5Y10 which is 70% more power-efficient but runs at 2GHz compared to the Envy's 3.2GHz. So with these two it's a toss-up between speed versus value and power-efficiency. A more high-level user who requires a higher grade CPU for, say, video editing, could well see the value in plumping for the Envy over the Asus model.

Encasing the Envy's screen is tough, brushed aluminium. The overall look is professional and aesthetically exceeds its price tag. The base is plastic but to the casual eye, or even anyone picking this up, this fact would likely go unnoticed. Our test unit had an ever so slight warp in the base meaning it wouldn't sit flush to a surface, but I'm talking millimetres here.

The much lauded (by HP) hinge has been designed to give the keyboard an extra boost at the back creating a better typing position. Desk-based users will immediately warm to this feature as it reduces RSI and finger fatigue. However the lipped edge (see above) digs into your lap after an hour or so, leaving a numb feeling in the knees.

Although not as bad as some, touchpads on HP laptops are often less reliable and more erratic than others (HP Envy 15, I'm looking at you). While dragging the cursor to select text, it would often misinterpret the data and zoom incredibly far in or far out. The unpredictability of this was frustrating.

The keyboard also has a design quirk in the form of the hash key, which lies directly between the backspace and Enter buttons. If you're used to an L-shaped Enter key then you're going to end up with a lot of lines ending in '#'. Not a huge problem, but it's something that new users will take a little getting used to. The keyboard does have redeeming qualities, however; it's backlit and features a very reliable fingerprint scanner too.