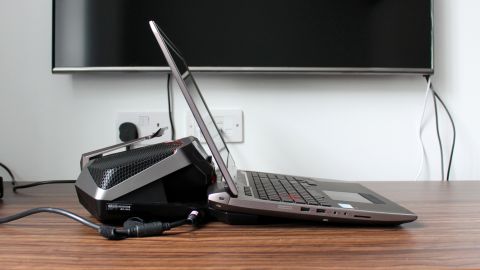 The first liquid-cooled laptop is a stylish and incredibly powerful machine - especially once it's connected to its water-cooling base station. It's absurdly expensive, however, and is held back by its Full HD display.

Asus is having a Spinal Tap moment. Where most other laptop makers crank up the power to '10', the company's GX700 aims for '11'. It's the first water-cooled gaming laptop on the planet, and one that can be instantly overclocked in a single click to increase frame rates in games. Innovative? You bet. Absurd? When you look at the cost of it, perhaps.

But let's ignore the price tag for a second and wallow in the GX700's ingenuity. It's a remarkable feat of engineering – not to mention one of the best Asus laptops for gaming – thanks to its accompanying crab-shaped base unit that crams inside radiators, a reservoir and a pump used to guide coolant to the laptop's GPU and CPU. This reduces their temperature, allowing them to be safely overclocked within Asus' predefined safety parameters using pre-installed software. For less confident gamers, it's a way to get hold of insane amounts of gaming muscle on tap without going near the BIOS screen.

Nvidia's 980M was the most powerful mobile graphics solution before being overtaken at the end of 2015 by the company's own full-fat desktop 980 GPU. Measuring an inch thick, the GX700 is a much more palatable size compared to early 980-equipped gaming laptops such as the Eurocom Sky X9 and the PC Specialist Octane II. Even Acer's more recent Predator 17X looks bloated in comparison.

The GX700's 17.3-inch frame is made of premium materials and houses top-end components including a 980 and Intel's Core i7-6820HK processor. That alone lends it more muscle than most gaming desktops, and you can multiply its power further still by hooking it up to the base unit once at home.

The GX700 follows Asus' ROG black-and-copper color scheme, which combines a smooth matte black base material on the wrist rest and keyboard with brushed aluminum along the perimeter. It's laden with sharp angles, especially around the back where the fan vents and ports for the docking station can be found. Capped off with a red trim on the keyboard's chiclet-spaced backlit keys, it makes for an attractive package – and one that's far less ostentatious than other ROG-branded products launched in the past year.

So, how much does it all cost? Well, the GX700 is a unique specimen, which is reflected in the price tag. The configuration reviewed on these pages is available from a single retailer in the UK for a whopping £4,061 (around US$5,634). In the US, you can pick up the version with 64GB of RAM and a 4K display (rather than 1080p) for $4,999 along with a free copy of Overwatch. Woo. Hoo.

Obviously, that's megabucks - and it's interesting to compare how it stacks up against the cost of a same strength gaming laptop, water-cooled gaming PC and 1080p G-Sync monitor. The former would start at around £1,700 (around $2,494) for the MSI GT72S Dragon Edition that comes equipped with a 4K display and GTX 980.

So far, so pricey - and it's well worth remembering that Nvidia is expected to update its line of mobile graphics cards this year following the release of its desktop-class GTX 1060, 1070 and 1080 GPUs. The company's Pascal cards are proving impressive so far, so it will be interesting to see what benefits Nvidia's new architecture can bring to gaming laptops.