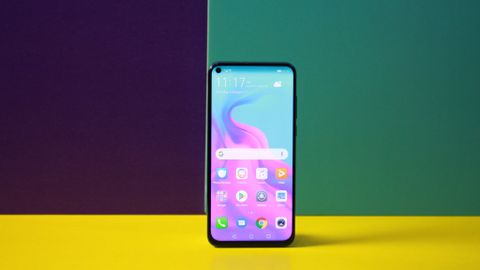 The Nova 4 checks all the right boxes for a premium mid-range phone. It has a fast processor, zippy performance and a reliable camera setup. And being a Huawei phone, it’s also got a talking point in the punch-hole display that works well and is great to view content on.

Between Huawei and its sub brand Honor, it feels like there's a new phone every other week and each phone has something unique to offer. This time it’s a punch-hole display that ditches the contentious notch.

We’ve already glimpsed Samsung’s take on the cutout display with the many Infinity-O display leaks and renders on the web. But Huawei’s Nova 4, along with Honor’s latest flagship the Honor View 20, are the first time we’ve seen the punch-hole displays in action, and while it may not be revolutionary, it does work.

Apart from the display and an all-new design, the Nova 4 retains the same battery capacity and processor as the previous Nova 3, but packs in more RAM this time and a middling triple camera setup. It’s all very mid-range and will appeal to those who want higher-end specs without breaking their wallet.

Huawei has officially announced the Nova 4 for the Middle East, a mid-ranged phone with a a 25MP selfie camera poking through the ‘hole punch’/pinhole. Other features include a 6.4-inch 1080p (2310 x 1080, 398 ppi) LCD screen and a Kirin 970 chip with 8GB of RAM, 128GB storage and a 3,750mAh battery. The Nova 4 is priced at AED 1,799 and it will be available in the UAE in two colours- Black and Crush Blue. Pre-orders start on the 8th of Feb with the phone hitting retail shelves on the 14th of Feb. #huawei #huaweinova4 #unboxing #tech #technology #android #mydubai #uae TechRadar Middle East

You’ll be able to pick up the Huawei Nova 4 for AED 1,799, the same price its predecessor launched with just 7 months ago. It comes in two colors: Black and Crush Blue and there’s 8GB of RAM on board this time with 128GB of non-expandable storage.

The phone is available for pre-order right now and is expected to hit retail stores by February 14th. Keep an eye out for pre-order deals and bundles across retail outlets to get some extra goodies along with the phone.

Huawei’s online store is bundling in a Huawei Band 3e, and if you’re planning to buy from Etisalat as a pre-paid customer you’ll get 6 months of STARZ Play and up to 1GB free data for three months.

Huawei have really come into their own when it comes to phone designs. Looking at the Nova 4, there’s no doubt that it’s a Huawei phone. It’s got an all-glass back with curved edges that makes it sit more comfortably in your hands, and a glossy metal frame around the body.

There’s a fingerprint sensor on the rear and the most prominent camera bump we’ve seen in a while, which even Huawei’s own case (included in the box) struggles to cover.

As with most glass phones, the Nova 4 takes on fingerprints and smudges all too easily requiring regular wipes. Despite the rear being clad in glass, the phone does not support wireless charging which is a little disappointing.

We’ve got the flamboyant Crush Blue version for review which has got the signature Huawei gradient finish that goes from blue to purple and looks great. If you want something more understated there’s also the sleek Black finish. It’s got a comfy in-hand feel albeit a bit slippery and is light at only 172g.

Flipping over to the display and you’ll find a Full HD, 6.4-inch LCD “FullView” display that takes up just a little over 86% of the front. The bezels are very thin on the sides, except for being a little wide on the chin, and the corners are elegantly rounded off. It’s an all-consuming screen that’s great to view content on.

The glaring cutout on the display where the selfie camera resides takes much less time getting used to than the polarizing notch, but it does draw your eye to it. The area in and around the cutout is slightly darkened which is an odd design choice. That being said, after a few hours of use the punch hole feels more like an obnoxious notification icon that you ignore.

It’s also not as intrusive when watching videos that fill the entire display, unless something important is going on in that particular corner of the screen, then you can just zoom out. We don’t recommend it for gaming though, where touch input can be finicky in the cutout region and might block important information. Under the settings the punch-hole is treated just like a notch where you can choose to hide the cutout behind a black bar.

So far, we’re loving the screen on the Nova 4, though it might not be as punchy as QHD displays on higher-tier smartphones but can very well hold its own against most other flagships in and above this price mark.

Huawei's Nova 3 raised the bar on what mid-range phones should offer, which is why the Nova 4’s specs don’t have the same shock and awe. We’re used to Huawei cramming their affordable phones with higher-end tech and features. The only notable upgrade specs-wide from the Nova 3 is the 8GB RAM and an extra camera lens on the rear.

Having said that, the Kirin 970 is a sturdy processor and still holds up to daily use. Performance on the Nova 4 is fast, and with more RAM on board you can have a lot of apps running at the same time before the phone slows down. Gaming is also smooth with no lags or jitters. The Nova 4 can run PUBG on the highest settings with no sweat and also has GPU Turbo to further boost performance.

The phone does heat up considerably after a good bout of gaming, almost to an uncomfortable level. but if you have the phone in its case then it should be fine.

You’ll find Huawei’s latest EMUI 9 on top of Android 9, which is cleanest version of EMUI we’ve seen so far. There’s a lot of features that you can enable to make your life easier such as gesture support, performance and battery optimisation - all accessible through a much neater settings menu.

The Nova 4 packs in a respectable 3,750mAh battery that should get you through a day’s worth of use that involves a bit of gaming, streaming videos and surfing social media. We’ll be sure to put the battery through its paces during our full review.

Coming over to cameras, the Nova 4 has one less selfie snapper on the front than its predecessor but adds an ultra wide angle lens on the rear. The front sports a lone 25MP selfie camera that’s aligned to the left, which is lucky if it’s your best side but others might have to fiddle around with positioning to find the best angle.

The on-board AI beautification allows for quick selfies but the processing is a little too much for our taste. You can also blur out backgrounds by enabling bokeh through the camera app.

The rear camera configuration includes a 20MP main sensor coupled with a 16MP ultra-wide angle lens and 2MP depth sensor for bokeh effects. EMUI 9 also features a myriad of AI effects and image recognition to add a touch of flair but more often than not photos end up looking over-processed and unnatural.

Initial results have been stunning, especially when there’s a lot of light around. The camera’s Night Mode also holds up very well, and manages to capture a good amount of detail while keeping noise to a minimum. The AI scene recognition is able to identify objects even when there’a a lot going on, and the bokeh on the rear camera is quick to kick in.

As far as premium mid-range phones go, the Nova 4 checks all the right boxes. It packs decent hardware in an elegant design with a touch of innovation. The cameras perform and manage to capture a lot of detail under most conditions, though the AI processing can be a hit or a miss.

Performance and gaming on the phone is fast and stable, but the phone heats up when you push it too much. Battery life is impressive where we easily got a day's worth of intensive use. If you happen to run out of juice, the phone can charge quickly with the bundled fast charger.

The Nova 4’s screen is really good for a middling LCD display. It’s clear with a good amount of color and surprisingly good contrast ratios. The punch-hole might not be the most elegant solution to achieving an all-screen display while also having access to a selfie camera, but it’s a definite step up from the notch.