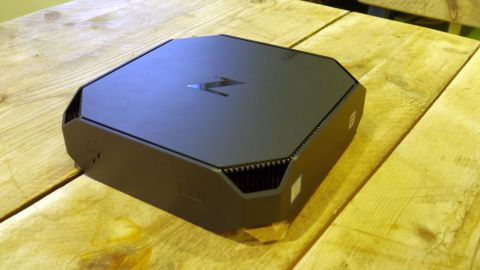 A well-thought-out, gorgeous, pint-sized workstation computer that can (and will) make your 8K dreams come true without breaking the bank.

The very mention of the term workstation will probably conjure images of massive beige or anthracite metal towers, designed to house the most powerful computer components known to humanity before being swiftly shoved underneath a desk, never to be seen again.

Well, times have changed, or at least some vendors are opting for something a little bit different – HP Inc (or HP for short) being one of them. The company has pushed out a number of eye-catching business products in the past few months with a clear underlying message: it’s no longer business as usual, as B2B no longer has to be boring.

The likes of HP’s Elite Slice, the EliteBook 1030, Elite x3, HP Z1 G3 all-in-one workstation and the HP 260 G1 have all shown that enterprise computing can be aesthetically eye-pleasing as well as functional.

Now another piece of the puzzle has landed: the Z2 Mini G3 has been hailed by HP as the smallest workstation ever built, and it looks positively tiny compared to some of its bigger brothers.

Barely bigger than your average thin client, the Mini G3 manages to pack some serious firepower into an elegant form factor with tons of expansion capabilities and impressive credentials including ISV certifications for 20 applications (including AutoCAD and SolidWorks amongst others).

Externally it looks something like a bloated pizza box with a thickness of 58mm, a weight of just over 2kg and a footprint of 216 x 216mm (smaller than a sheet of A4). HP says that it is 90% smaller than your bog-standard business class tower workstation, which would include its own Zx40 series.

Designed to be used vertically, horizontally or even hung behind a monitor (thanks to a VESA mount), the Z2 Mini G3 has four handles and a tool-less accessible chassis which opens easily.

Other than the stylised HP and Z logos, there’s a power button sitting alone on one side of the PC, with two USB 3.0 ports and an audio connector located on another side, and finally, there’s also a GbE port, four DisplayPorts and an extra four USB ports (two USB 3.0 and two Type-C).

A serial port is also available optionally for use with legacy products, plus there’s 802.11ac Wi-Fi and Bluetooth 4.2 to ensure connectivity out of the box.

Opening the Z2 Mini G3 takes only a few seconds, and the first thing you’ll see is a 2.5-inch hard drive (or in our case with this review sample, an empty bay that can house one) and two fans. The two SODIMM RAM banks can be easily accessed should you want to upgrade the memory modules by yourself.

There’s no card reader and no other display output, so no D-Sub or HDMI. Clearly HP expects you to buy adaptors should you want to hook up any other monitor port, but sadly the company doesn’t offer any options at checkout, a missed opportunity.

To keep the Z2 Mini G3 as small as possible, HP has resorted to subterfuge, using an external power supply unit – a 200W model that’s similar to those found with mobile workstations (traditional workstations have integrated PSUs for most part).

A sleeve is also available to physically block USB ports and secure the workstation. As expected, this machine runs Windows 10 Pro with a Windows 7 Pro downgrade option, and it includes both a branded keyboard (Chicony KU-1469) and mouse. It’s worth noting that you can power up the device from the keyboard itself without physical access to the unit.

In use, the G3 was surprisingly quiet. Indeed it was so quiet that we even wondered whether the fans were working – eventually they came to life when the PC ran our usual battery of tests which includes some heavyweight applications (see the results above).

Where it does get interesting is that the Z2 Mini G3 can be configured to accommodate a Xeon CPU and an Nvidia Quadro graphics chip (albeit an entry-level one), and although there is a price premium compared to a traditional tower workstation, it is not as dramatic as one would expect.

The Z240 and Z2 Mini Performance sporting similar CPU, RAM and storage configurations have an 8% price hike based on HP’s SRP, one largely justified by the inclusion of a discrete graphics chip – the M620 on the latter.

This device might even give the more expensive HP Z1 G3 all-in-one workstation a run for its money.

The Z2 Mini G3 workstation is perfect for most computational tasks if you are constrained by space, and the obvious drawback of such a small form-factor is the lack of upgrade capabilities. This remains a single socket, one-card workstation with two storage bays.

Still, it trumps a lot of the bigger/more expensive competition out there when it comes to the sheer number of display options. Remember, other than packing a Quadro GPU and Xeon CPU, it can power up to four 4K monitors via its four DisplayPorts, allowing users to drive 8K worth of pixels.

So if you want something small, yet powerful and scalable, there’s barely anything on the market which can deliver such a combination, even at a much higher price point. For now, HP has the first mover advantage, but you can expect the rest of the market to catch up very, very soon.