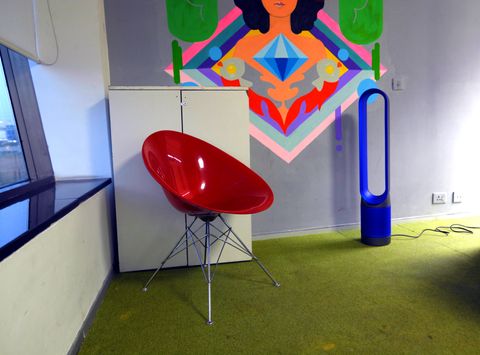 The Dyson Pure Cool Link is without a doubt the best air purifier you can buy in India today. That is, if a premium air purifier is what you want and can afford.

Dyson's entry into the air purifier market will be unnerving for existing manufacturers. The company is renowned globally, giving it the chance to charge a premium for its brand value.

That said, expensive also means exclusive in India. So, people who buy Dyson's products will want nothing less than perfection. That's just how India is, making Dyson's task easy and difficult at the same time.

The Dyson Pure Cool Link Tower will cost you a cool Rs 39,900 and it was launched in India on 15 February this year. The company is also selling a smaller "Desk" version of this device here, priced at Rs 34,900.

The company also sells hair dryers and handheld vacuum cleaners in the country, which will all be sold in online and offline outlets.

Of all the air purifiers I've reviewed, the Cool Link has been the easiest to set up. It's delivered in a tall box, in two halves. The bottom part sucks dirty air in, while the top part blows clean air out. To be clear, this is a "fanless" air purifier, meaning you won't actually see any blades. You can put your hand through the top part without injuring yourself.

To set it up, you simply clip on the top and bottom together. Once clipped, the purifier is ready to use. The entire contraption is about a metre high and will fit in any corner of your room. It has a 2.5-metre cord that is supplied with the purifier, which should be enough for most homes.

The last step in setting the purifier up is the remote, which pairs as soon as you place it on top of the purifier. The remote operates on infra-red, so you will need to point it at the small display on the purifier when required. You can use the remote to increase intensity, change modes, set times, toggle oscillation and night mode, and turn the purifier on or off.

Dyson told me they would send an engineer to set up the device, but really, the whole process was too easy for me to wait an extra day. You need no technical knowledge or know how to do it.

A Dyson engineer told me that the company recommends the Tower for most homes. However, it is actually too powerful for most regular rooms. In a 20x20 room, the purifier cleans the air in less than 20 minutes. That is, in test conditions, when I was intentionally burning matches etc. to increase PM2.5 levels in the room. Since bringing the Cool Link into the room, there's been noticeably lesser dust on my furniture too.

The Cool Link should be kept in a corner of the room. From there, it can oscillate to blow air out in all directions. It has two sensors that analyse, PM2.5, PM10 and VOCs (Volatile Organic Compounds). VOCs can be produced by paint varnishes, air fresheners, smoking and more. Essentially, the Cool Link will take care of dust, invisible pollutants and odours, just like most other purifiers.

The sensors on Cool Link measure the air quality in your room, send it to the company's cloud servers and turn up the fan intensity. In practice, there's a sensor lag of about 15 minutes, in which all of this calculations are done. You won't feel this happen unless you're actually blowing smoke or other pollutants in your room. On regular use, the purifier will kick into high gear intermittently.

The air intensity can be toggled between one to 10 and the company says four is the economy speed. That's the speed the Cool Link will choose whenever you set it to Auto, and it will kick into high gear in the next 15 minutes if required.

The purifier uses a 360-degree glass HEPA filter that can be changed manually when required. It's lab tested for 12 months usage but could last you anywhere between eight to 12 months depending on your usage. After running for about 8 hours a day for a week and a half, my unit says the filters will last for another 4159 hours (about 6 months).

The Dyson Link app is new in India and it's the most confusing bit about this device. That's not to say it's not useful or easy to use, it's just set to higher standards than those prevalent in India. In the week and a half that I've used it, the app has never shown me acceptable AQI levels, settling to average at best.

Dyson says this is because the app matches data with international standards. As a result, it never recognises AQI in India to be acceptable. The app shows you both indoor and outdoor air quality, of which the latter it gets from the Central Pollution Control Board.

As a result, you will almost never see the purifier's intensity drop below seven for regular use. In the long run, that could mean the purifier will require a filter change faster in India than it does in UK etc. Based on my current usage, the filter is set to run out in the next six months, a couple of months shy of Dyson's claims.

The app also has a remote, that allows you to use the Cool Link from anywhere in the world. You can set schedules to turn the air purifier on at set times during the day. You can also turn the product on/off remotely whenever required.

The schedules didn't work at first, but that was probably a minor bug. I reset the time zones on the app once and the schedules started working.

Standing at just over a metre, the Dyson Pure Cool Link is perhaps the sleekest purifier you can buy in India right now. It's available in white and blue colours and they both look quite sleek. If you care about the aesthetics of your room and can afford this device, it's the one you should go for.

The base diameter is just under 200mm, meaning it doesn't take up a lot of space either. Similarly, it weighs just under 4kg when fully set up, meaning you can move it around quite easily as well.