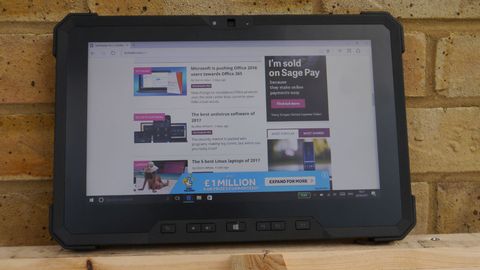 The Dell Latitude 12 7202 might have an old processor, but a deep discount scheme combined with a plethora of accessories and parts mean that this rugged tablet is well and truly a bargain.

The Dell Latitude 12 Rugged Tablet 7202 is not your standard slate – the device is targeted at those who usually slave away on an oil exploration project or work in the Amazonian tropical rainforest (as a biologist maybe).

It is designed to be dropped, bashed about, and generally undergo all sorts of treatment that would pretty much be guaranteed to destroy any consumer-grade tablet. As such, this is no ordinary slate and shouldn’t carry the same expectations as your average model.

That’s also probably why Dell has yet to release a new version – this one has been around for nearly two years and is still being sold despite having a Broadwell-based processor.

Longer product cycles ensure that platforms mature slowly, especially as the capital investments involved are often an order of magnitude bigger compared to the consumer market.

To say that this is a solid tablet would be a massive understatement; it has been designed and manufactured to withstand extreme conditions.

It has IP65, MIL-STD-810G and IP-810G certifications (rather than merely meeting the standards in laboratory tests), and these prove that the Latitude 12 7202 has a thick skin and should give other rugged tablets like the Xplore R12 (iX125 R1) or the Getac RX10 a run for their money.

At 312 x 203 x 24mm, it is fairly large for a tablet with an 11.6-inch display, while its weight – 1.79kg with two 2-cell 26Whr hot-swappable batteries – puts it in the ‘mildly-transportable’ category (as opposed to easily portable). You can only operate this device at arm’s length for only a short time before experiencing muscular discomfort (although your mileage may well vary).

The Latitude 12 is built mostly to withstand harsh environments, not win design contests, which explains a lot of pragmatic/functional decisions made by Dell.

There are massive rubber bumpers on the corners and the rubber enclosure itself is a couple of centimetres thick in order to protect the screen, arguably the most fragile component. The latter is also protected by the use of Gorilla Glass 3 technology in its construction.

Look around the tablet and you will find that most ports are covered with rubber flaps to prevent damage. Opening and closing them will be an issue if you wear gloves and it is worth noting that they can’t be locked. Dell also used a patented HZO liquid protection technology to stop water from killing your tech.

Default ports include USB 3.0, micro-serial port, mini-HDMI, microSD card reader, an audio combo connector and the power connector, which can be used with other compatible 45W Dell laptop power adaptors (like the one on the 2015 edition of Dell’s XPS 13).

Given the varied markets the Latitude 12 is expected to operate in, the tablet has an extensive range of connectors as well, including POGO-pin ports for a docking keyboard and a modular expansion pack.

Note also the presence of air vents to cool the device. Even if that sounds counterintuitive given the rugged nature of this tablet, these slits doesn’t prevent it from being reasonably water-resistant. Dell uses a proprietary fan-based thermal management system that combines both passive and active cooling to keep the slate cool.

During our hands-on time with the device, the fan did work for reasonably long spells and we noticed that the tablet warmed up significantly, especially under load.

As expected, all the physical buttons (power, Windows, volume up/down, three programmable buttons and auto-rotate) require far more pressure to register than traditional tablets out there. Not only does that prevent accidental inputs, it also makes them easier to work with gloves. We further appreciated the fact that pressing the buttons causes the device to buzz and vibrate, so you know they’ve been pressed.

The tethered stylus slots nicely in the body of the tablet. It’s not as stylish as the active models, but at least you don’t have to charge it regularly and the pen will work regardless of the immediate environment.

Our sample came with 8GB of dual-channel LPDDR3 1600MHz memory and a 128GB SSD (an M.2 2280 model from Lite-On) which was half full. There are two cameras with the front one sporting an interesting flap that allows the user to physically obstruct the lens.

The display, a glove-capable 11.6-inch 10-point multi-touch resistive screen, has a 1366 x 768 pixel resolution which is low, but this can be explained by the fact that, in the markets targeted by the Latitude 12, accuracy and battery life are far more important than the need to cram in as many pixels as possible.

The screen is not as bright as one would expect, although it does a decent job outside thanks to its matte finish. The tablet runs Windows 10 Pro and carries Dell’s solid three-year ProSupport and Next Business Day On-Site Service as default.

Oddly, while Dell included a full array of its own applications (Data Protection, Backup and Recovery, Rugged Control Center etc), there were also a couple of surprising additions like Deezer and Candy Crush Soda Saga; hardly enterprise-grade applications.

In use, the older Broadwell processor posted a decent score in our benchmark testing, although one can only wonder what a Kaby Lake upgrade might bring to the tablet (for a hint, check out the Xplore R12 which boasts a far faster Core i7-7500U Kaby Lake CPU).

The storage could also use an upgrade from a 128GB SSD. The limited capacity and lack of free space could explain why the Lite-On drive performs poorly on CrystalDiskMark and Atto in write tests (as opposed to read).

As for the battery life, the Latitude 12 7202 managed 4 hours 26 minutes with 27% battery left on our standard test (streaming a YouTube count-up video with brightness set to 50%). Extrapolating that number, one can expect the tablet to last just over six hours.

Dell sells the Latitude 12 7202 with two batteries for £1,599 (around $2,040, AU$2,700) excluding VAT and delivery. Options worth mentioning include a self-encrypted drive, a desktop dock, kickstand, keyboard cover with a kickstand, an extended IO module and a scanner module.

Compared to the competition, this is almost a bargain although we suspect that Dell is currently doing a bit of a clear-out – the device carries an official SRP of £2,284 (around $2,920, AU$3,860).

There are some issues here, as we’ve discussed – like a small SSD and an older-generation CPU – but these flaws can’t distract from the value proposition represented by this tablet at the current price.