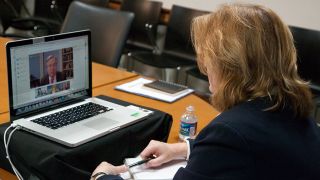 "It's silly to think that the best talent lives within 10 miles of your office" said the CEO of a startup to me last year. That's when the penny dropped.

It's 2014, we live in a time of mind boggling innovation, rapid progression and globalisation, yet we still insist on dragging people across hell and high water (the district line) to work in an office for no other reason than 'just because'. That's madness. But what's worse is picking employees based on their geography rather than their talent, yet it's the accepted logic.

The numbers show that we're still a nation of office christmas parties and Tesco lunch-time meal deals. According to the ONS, 87% of the British workforce are based in an office and only 2.1% of that workforce considers their home their primary place of work (that doesn't include self-employed people).

This is at a time when 25% of workers' salaries is spent on commuting and, just to add more sugar spice to the batter, commuters are amongst the most depressed workers. Another study by the ONS, that proponent of fact and virtue, has shown that commuters who travel for an hour or more are less happy with their life than those with shorter commutes.

Productivity, too, is boosted by the occasional 'home day'. In preparation for the Olympics in 2012, O2 asked 3000 of its Slough based employees to work from home for a day and the results were telling. The home-working staff saved a collective of £9000 in commuting costs and instead of travelling, an additional 1000 hours of work were done. Workers also got to have an additional 1000 hours of sleep or relaxation.

The pilot went so well that O2 has set up all of its offices for remote working and provided staff with software, systems, laptops and smartphones for employees who want to ply their trade outside of the office confines.

When you consider all of that you have to wonder why remote working hasn't been, at the least, fully embraced, and at best, become the norm. We spend a lot of time unofficially remote working by checking our emails endlessly, so why not make it official and save yourself some late-night-email-checking anxiety?

The technology isn't just available, it's advanced. The obvious software like Google Hangouts, and virtual private networks means you can have meetings and sign into the work server securely. But it goes further than that.

The unique quirks of an office can be replicated in virtual form too. For example, say you want to have a private conversation with another employee, rather than speak quietly at the back of the office or look shifty as you leave together, you can have a secure anonymous encrypted conversation over Cryptocat.

There's also the benefit of using your own software to get tasks done, instead of using IT department approved software that's either years old, proprietary or simply not the best option. You can share documents over Google Drive or WeTransfer, rather than go through the frustrating rigmarole of hoping the file isn't too big to email.

Companies benefit too, aside from the obvious financial benefits of not having a costly physical office, their employees are working in their best possible working environment because they created it.

Ben Dowd business director at O2 explained some of the net results since 2012 remote working project: "Absenteeism has fallen, the number of staff returning from maternity leave is increasing, and everyone who works flexibly reports that their work/life balance has improved".

Next Page The ice is thawing
See more Management news