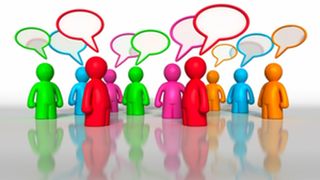 Don't underestimate the power of social and word of mouth

A brand's fate is in the hands of their customers, and 90% trust peer recommendations over what brands say. We spoke to Katy Keim, CMO at Lithium, to discuss how brands can engage with their audience effectively in a world that is continuously changing and evolving digitally.

TechRadar Pro: Consumers make purchasing decisions based on their peers – how can online brands take advantage of this?

Katy Keim: Communities are vital for online brands, enabling brands to establish themselves, evolve and create real relationships with their consumers. These communities also provide the platform for consumers to connect – not only with a brand but also with each other.

Peer-to-peer recommendation fuels the majority of online transactions, an example being that 75% of all new GiffGaff subscribers were driven by word-of-mouth. In order to become involved in their community, brands need to build strong relationships with their audience. This means:

TRP: How can you turn a consumer into a brand ambassador?

KK: Turning a consumer into a brand ambassador is dependent on the relationship you build and maintain with your audience. The key for brands is to convert awareness amongst influencers into advocates, who take action and play a real part in your business, by generating interest and desire.

Once you've built a strong following, show your appreciation. Reward your most loyal and socially influential followers; make them feel part of the brand rather than just another consumer. If you do, then your brand will be rewarded.

TRP: How can brands find underground influencers who play a vital role in their brand's reputation?

Many underground influencers won't be easily directed or swayed by the herd. They excel at being the first to discover a new brand or product, and it's this uniqueness that makes them a valuable asset to your brand.

If you want to engage with them, then your brand needs to stand out, and make it appealing to them in a different way. This may mean avoiding traditional marketing tools, as this may put off this audience. Think outside of your brand's 'box'.

TRP: Have you seen examples of brands trying to rebuild their reputation after a social disaster?

KK: The key to recovering is to address the program shortcomings or outright fail honestly, openly, and with an emotional tone appropriate to the gaffe or mistake. It may also mean not only mass apologies or retractions but also personal responses to individuals who are offended or upset.

For example in 2014, the New York Police Department launched a social media campaign entitled #MyNYPD. The aim of this campaign was to encourage members of the public to tweet images with their local NYPD officer, with the hope of demonstrating a friendly personal side to the force.

However, Twitter users hijacked the campaign to show the brutality of the NYPD. In just a few hours #MyNYPD received more than 10,000 uses, many of them negative, with users sharing images of physical violence and sharing personal stories. This campaign, which was intended to convey a positive image of the NYPD, did the exact opposite.

Brands absolutely can recover from a social disaster – but they cannot do so if they retreat into themselves and hide behind "no comment" or play like nothing happened. Being extra engaged, especially sensitive, and keyed into the social sentiment is critical.

Sometimes a simple heartfelt apology is enough – sometimes a sustained campaign to rebuild community bridges may be required: one size definitely does not fit all when we're talking about recovery.