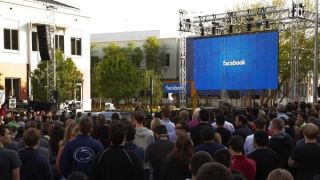 The cost plummeted to $38 just before noon before making a steady rise in the afternoon and eventually falling back down back to $38, the same price as the social media giant's initial IPO.

"[Today's trading] doesn't have anything to do with what the company's worth," said Wedbush analyst Michael Pachter.

Facebook's first day of public trading may have ended on a slightly sour note, but the company did manage to break at least one record: Facebook's trading volume today was the biggest for any IPO in history.

More than 460 million Facebook shares were traded today, narrowly surpassing the previous record of 458 million, reached by GM in 2010.

Facebook amended its IPO documents earlier this month due to the fact that the company doesn't make ad revenue from mobile visitors, an increasingly significant portion of the site's users.

The question of Facebook's long-term viability has also arisen, but at least one analyst thinks those worries are unfounded.

"It'll find an equilibrium price in the next week or two, but [today's trading] doesn't have anything to do with what the company's worth," Wedbush analyst Michael Pachter told TechRadar.

"I think that the breakdown here was that they offered too many shares," Pachter said. "And actually they sent a false signal to the Street on Wednesday when they decided to offer 50 million more shares, so the implication was that there was so much demand that we actually need more stock to satisfy it. And that turned out not to be right."

Pachter is confident that Facebook remains a sound long-term investment.