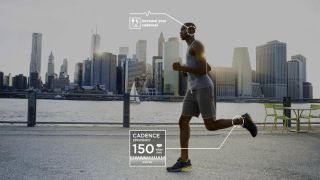 It's been good in the RMoT world recently, with some really rather nifty times coming out of my training and weekly Parkruns – including the sub 19 minute 5K I've been chasing to get back to for a year.

While it's impossible to say for certain what element of the recent changes is having the greatest effect, new sensor has dramatically altered the way I run.

For the last four and half weeks I've been using the Moov system to help me train a couple of times a week – but running training barely scratches the surface of what this little wearable does.

If you've not read the column in recent times, let me refresh; Moov is a startup-created sensor that you wear around your wrist or ankle, and from there it can track through myriad sensors in 3D.

This means you can do everything from running to cycling to swimming to seven minute workouts and have them accurately tracked, all through your phone with the feedback pumped in through headphones. (I know I've mentioned it before, but it's taken me a while to properly test while still maintaining my training).

Moov can help you train for loads of things, making it great value for money no matter your discipline, but I'd like to focus on one key part of the Moov platform though: the running efficiency.

In Moov's running app there are loads of things you can do, such as improving speed or endurance, but most similar apps do the same thing. But very few help you improve efficiency – and it's working wonders.

The first thing it does is get you thinking about your stride; making it smaller and quicker, and pushing your body weight forward so you're pretty much running on the balls of your feet.

Again, this is something most other apps could manage, as it's just tracking your cadence (steps per minute) – but where Moov excels is through the coaching and the 3D tracking.

The coaching pops up every so often, such as whenever your speed drops or at predefined intervals to offer tips.

These include 'imagine you're running on hot ground to increase your speed' or 'keep your spine tall and your abs tucked in to maintain form' and have a genuine motivational effect on how I've been running – and after a few weeks, the lessons are absorbing into muscle memory.

There's also the fact that the motion sensor can tell how hard you're slamming into the ground – when you're pounding too hard you'll get a little warning, forcing you to think about your form, trying to lighten every step and keeping things on track.

It's not a perfect system though. I've got no idea why the makers of Moov prefer to use the smartphone to sense steps per minute rather than the sensor itself – perhaps that's because you've only got one on, and just doubling the speed to get your cadence might not be as accurate.

But it would be better than using the phone stuck to your arm, miles away from the ground – in testing it'd spit out a random speed around three or four times per run, telling me my cadence was down when I knew I hadn't changed speed one jot.

It also promotes a very slow pace – good for muscle training, less good for helping you integrate the form into a faster form of running. It's also hard to interact with the phone while running, so doing things like changing the difficulty (by swiping the screen up) as per the instructions is a mad dash in the 30 seconds you'll get between reps.

But that's nothing compared to the improvement in form I've been seeing. I'm running more lightly, remembering to tense my stomach a lot more and picking up my legs more regularly than ever.

In addition, the Achilles tendons and my calves (which ached terribly for a couple of weeks while I 'taught' my muscles this new way of running) have become tangibly stronger – I can feel the launch of each stride, especially at the start of each run, is much more potent.

So while the Moov training has been a bit boring at times (running with really small steps is quite hard to maintain, especially when you're not going far) it's been a good way to spice up the recovery runs on Monday and Wednesday.

There's a new version of the sensor coming up: Moov Now doesn't need to be regularly charged and looks a lot sleeker too. It doesn't do a lot more in terms of exercise (the changes are more aesthetic, along with step and sleep tracking) so you can happily buy the older system for $40 / £50 on Amazon and get exactly the same result.

Moov brings a new dimension to running that other sensors simply haven't been able to match.

And that's just for the running side of things: there's so much more to explore through the Cardio Boxing, workouts or just trying different running exercises too.

Is this the future of wearables? There's still a long way to go for Moov, but with loads more functionality in the pipeline, it's one of the most exciting fitness sensors I've used in ages.

The last week for Runner G

It's the final week of training for Runner G before the big race next week. In just seven days she'll be taking on her first 10K race in south west London – and it's fair to say she's got a heavy dose of the Runner's Nerves, having never gone over 8K so far – let alone the big 6.1 miles she'll be facing.

The appearance of shin splints a few weeks ago has caused a bit of a wobble in the training plan, which is why my intended plan to interview her in the build up doesn't seem fair any more.

But when I started wondering about how the tech she was using had helped, I realised it was actually me that had benefitted from using extra gadgets more than she had. Sure, the MiCoach platform she's using has been great for setting the plan, but from a training standpoint, without technology her journey would have been a lot harder to follow.

For instance, the great thing about using something like MiCoach is that I can get instant access to her results. She lets me know that the run is done, I pull out the iPad and in seconds I can see how it went.

Then we spend some time debriefing over WhatsApp– and being able to do that in real time, with the emotions of a good (or bad) run pouring out, is hugely beneficial in terms of seeing whether there are any tweaks that can be made to the schedule to help.

Then it all gets uploaded to SmashRun to give a better view of her progress using more in-depth stats.

By getting her to strap on a heart rate monitor, I can even assess her fatigue levels better, meaning that I can see if her claim that something hurt more than usual is physiological in nature – or just those dratted running demons that we call get starting to circle.

And by constantly using something like WhatsApp, even the little worries can be easily answered in seconds. For instance, with the current bout of shin splints, she's been going through a daily stretching program and using a foam roller for the first time.

I can then easily send specific YouTube workouts over to help her understand better what's needed, and help accelerate her progress too.

Basically, if you're a new runner and you've got someone who loves running a whole heap, make sure you lean on them as hard as you can – more often than not they'll love to help out and give advice, and these days it's easier than ever.

So fingers crossed for Runner G next Saturday – it's going to be a big one for her, but she's trained well and here's hoping for a brilliant race report this time next week.

· If you've got any tips, tech you want tested out or just want to mock me, I'm @superbeav on Twitter, and you can see my stumblings on Strava too.

· If you want to see more data, follow me on Smashrun - if you want to sign up, please use this link - once you see the service, you'll work out why...

· Read the rest of the Running Man of Tech story here